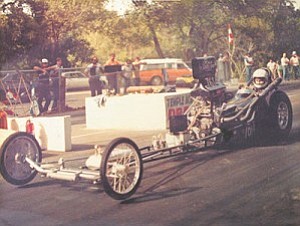 On March 24 at the Southwestern International Dragway in Tucson, longtime Winslow resident Ron Miller was inducted into the Arizona Drag Race Hall of Fame.

In 55 years of the sport in Arizona at 12 tracks, thousands of people have participated as drivers, crews, promoters, etc. So far, only 30 people of this demographic have been awarded with the honor of being in the Drag Race Hall of Fame.

Miller is the first inductee that is not from the Phoenix and Tucson areas.

After finishing high school in his hometown of Dallas, Texas, Miller moved to Winslow, hired on with the Santa Fe Railroad in 1957 and 46 years later retired as a conductor.

His 50 years of devotion to the drag racing sport started at his first organized race in 1956 in Caddo Mills, Texas at the Texas State Championships. This was followed by the first national event he attended in 1958 in Oklahoma City and his first competition in a national event in Detroit 1960.

Over the next 49 years, Ron attended over 100 national events in 15 locations and 11 states.

Miller is a member of the Winslow Drag Race Hall of Fame with the most overall event wins in Winslow, with several points championships in several different classes. Miller once had two wins and a runner-up placement during a three-day Northern Arizona Championship in 1986. During that same competition, he defeated several world champions and won this last drag race in Winslow.

Miller has raced in six states with event wins in Arizona, California and New Mexico. He said in some areas like Bakersfield, Calif., it is common to have 100,000 in the stands at an event.

At the 1961 National Hot Rod Association Regionals in Phoenix, he won both class and eliminator, handing world champ Bruce Morgan his only defeat that year. Miller also was runner-up at the 1964 Winternationals at Beeline and again at the same event semifinals in 1980 and was one of the Quick 16 at the Pro Winternationals in Eloy during the '80s. Miller crewed and assisted many racers over the years, including the NHRA alcohol funny car of Winslow residents Charles and Liz McLaws.

Shortly after joining the NHRA, Miller became president of the Winslow Renegades Hot Rod Club in 1959 and held that office for many years, while submitting drag racing articles to local newspapers. He also became the Winslow Dragstrip Manager at the Winslow Lindbergh Regional Airport from 1959-1986 until it was closed due to insurance requirements that could not be met. Miller tried to comply with the requirements and helped to organize and develop the Northern Arizona Timing Association where he assisted in designing and building a "dragstrip in a box," with a portable PA, timing system, bleachers, concessions, etc.

"We just could not build a portable guardrail," he said.

And so the Winslow Airport closed to drag racing.

In later years, Miller was elected to the nine-member board of the Standard 1320, an Internet group of over 350 members dedicated to honoring the early history of drag racing.

Over 100 members of the Standard 1320 belong to the International Drag Race Hall of Fame or similar honors. Standard 1320 member Tom Hanna's dragster, referred to by many as the "most beautiful car ever built," still bears Ron's Speed Shop on its side.

As 1320 Race Director, Miller has promoted and staged annual events for the last four years in California and in Arizona at Speedworld, "the old Mel Larson site."

Miller was also appointed to the Nitrogeezers, another Internet drag racing nostalgia group.

In his acceptance speech to being inducted to the Arizona Drag Race Hall of Fame, Miller said:

"I have been in love with drag racing for over 50 years and devoted a large part of my life enjoying and helping it in every way possible as a fan, racer and promoter. It has been a great joy because of the wonderful people in the sport. I am sincerely honored and humbled by my induction into the Arizona Drag Racing Hall of Fame to join the likes of John Loper, Red Greth, Larry Steinegger, Al Eshenbaugh, Tripp Shumake, Don Toia and all the others who have been heroes of mine for so long."

"I wish to thank Chris Stinson, Skip Bukley, Larry Steinegger, Kevin Cox, Bill Garver and Skip Sawyers for all the help through the years along with all those people who helped make the Winslow Dragstrip such a wonderful experience and memories for so many racers and their families," Miller said.

"Lastly, I would like to thank my family for putting up with my addiction to drag racing and Cynthia and Lynn Miller who both enabled me to enjoy the sport I loved and to reach this honor."