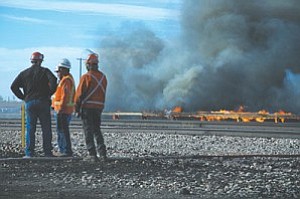 BNSF Railroad workers survey the damage of the bridge as fire crew fight the fire below.

Last Thursday afternoon, a massive plume of smoke filled the air over Winslow when a fire took hold on a wooden and concrete bridge under the BNSF rail line just east of La Posada.

Winslow police apprehended at least one of three young boys after they fled the scene when the fire started. Police were not available to further comment on the incident.

Mike Salwitz was outside of the nearby railcar he lives in at the railroad depot when he said he spotted smoke and kids running away. He asked one boy running in his direction if he started it.

Salwitz said the boy claimed to have used matches to start the fire that quickly ignited the creosote-soaked lumber that became an inferno as wind ripped through the tunnel of the bridge.

The Winslow Fire Department began fighting the fire from the south side of the Ruby Wash with the help of ADOT water trucks. Volunteer firefighter Chip Cunningham jumped in first to begin dousing the underbelly of the bridge.

Smoke blew north the rest of the evening and settled on the town that night, but was clear by the next day.

BNSF Structures Foreman Frank Baca watched the firefighters put the bridge out. He knew it had compromised the strength of the bridge, so they called in bridge crews from Kingman immediately after the fire began.

"After we get the fire out, we will asses the damage and will fill it in will dirt until we can begin working to get underneath it and make repairs," Baca said.

Crews were out the next day, dirt was pushed under the bridge and all trains were able to move as usual. One of the bridge repair workers said they are repairing about one segment of the bridge per day.