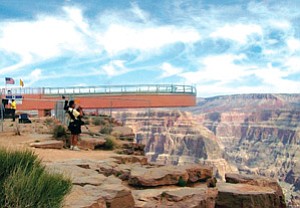 An unidentified photographer cautiously takes in the breathtaking view of the Grand Canyon from the West Rim as the newly christened skywalk hangs over the majestic backdrop. The Hualapai Tribe hopes that the skywalk will bring in much-needed tourism revenue (Photo by Jackie Brown).

GRAND CANYON, West Rim-It can withstand 100 mph winds, earthquakes and the weight of more than 800 adults. This week will begin the test of whether or not the Grand Canyon Skywalk can buoy the fortunes of the struggling Hualapai tribe, who number approximately 2,000.

A ceremonial "first walk" event held, Wednesday, March 20 drew more than 1,000 members of the media and VIPs from throughout the world. "This represents the future for the children of the Hualapai Nation," said Tribal Chairman Charles Vaughn. "This is an occasion for the tribe that begins our venture into economic development that will certainly be a boon to our children's future."

The structure, crafted from more than 1 million pounds of steel and glass, opens to the public today-three years and $30 million after the Tribal Council voted to go ahead with the project. The cost for a straight-down look into the gorge from 70 feet out is $25, along with entry fees starting at about $50. Cameras and cell phones will not be allowed on the Skywalk.

Las Vegas developer David Jin, who envisioned the glass walkway during a family visit to Grand Canyon, secured financing for the project. He and the tribe have a 25-year agreement, the details of which are confidential, according to Steve Beattie, Grand Canyon Resort Corporation Chief Financial Officer.

The guest of honor at the event was former astronaut Buzz Aldrin, whose appearance reinforced the theme that the Hualapai are stepping out into risky, new territory. "I felt wonderful," he said after leading the first walk along with tribal leaders and Hualapai royalty. "It's not exactly floating on air, but a wonderful...vision of hope for the future for all those who come here. It is not in the least disturbing, at least for a couple of us," he added, referring to fellow astronaut John Bennett Herrington, the first Native American in space.

The huge media turnout was fueled by some of the best marketing money can't buy, taking shape on the Internet as an urban legend. When news started circulating in fall of 2005 that a massive glass bridge would be built over the Grand Canyon, Snopes.com, Netlore.com and others answered yes, it was true. The Skywalk is one phase in an ambitious capital plan that the tribe hopes will double visitation from 300,000 to 600,000 annually.

The name "Hualapai" comes from an English variation of "hwal'bay," which means "People of the Tall Pine." The remote reservation covers 1,600 square miles and is only 90 miles downriver from Grand Canyon National Park. But to get to the tribal capital of Peach Springs is a drive of some 250 miles, 70 miles northwest of Kingman with the last 14 miles on unpaved road.

Along with infrastructure improvements like paving the road, the tribe plans a 6,000 square-foot, three-story visitor center with museum, movie theater, lounge, gift shop and food options including fine dining on the rooftop.

Traditionally hunter-gatherers, the Hualapai today struggle in a wage-based economy with few employment opportunities, aside from government employment. Unemployment rates range from between 50 to 70 percent depending on the season, and more than half of Hualapai households fall below the federal poverty line. The median age of the tribe is a little over 23 years old. Chairman Vaughn acknowledged some conflict between old and new viewpoints, but in the end, tribal leaders opted for what they say is their future.

"I would regard myself as a traditionalist," he said. "[With] concerns of building on the Canyon and keeping the pristine environment intact in this area, I weigh that against what a project like this poses for the future of our tribe and our children, [and] it puts those issues into perspective. The benefit far outweighs concerns I have in regard to the environment."

"Reservations were created and we became dependent on the federal government," Vaughn said. "This monument marks our effort to become self-determined. To determine our future and destiny, not only for our people but for our youth who will be the leaders of tomorrow."

In the mid 1990s, the tribe attempted to establish a casino, but that failed due to their remote location and the close proximity to Las Vegas, Nev.