Tribes, activists gather in celebration of the Peaks 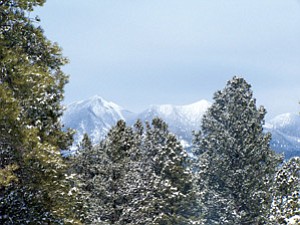 FLAGSTAFF-At least 200 people gathered in Flagstaff's Heritage Square on March 21 to celebrate the Ninth Circuit Court decision against artificial snowmaking on the San Francisco Peaks. The event was emceed by one of the lead players in the court battle-Andy Bessler of the Flagstaff Chapter of the Sierra Club.

In recognition of the multicultural effort that supported the decision, longtime Flagstaff business owner Martha Shidler performed bagpipe music and the Reverend Ellen McAllister-Flack of the Bahai' faith offered a prayer. In part, she read, "Let all religions agree-to see the whole earth as one." Navajo medicine man Clarence James of Jeddito offered a traditional prayer. Damon Whatahogomie from the village of Havasupai traveled two days to offer a prayer and songs from his own people.

Many other individuals spoke of their joy and relief at the court's decision, which many hope will bring an end to a struggle Native people have been fighting since 1938.

Noted Flagstaff author and activist Mary Sojourner shared a piece she wrote in honor of the decision, and called the day the happiest in her life.

Howard Shanker, who successfully represented the Navajo Nation, the White Mountain Apache Tribe, the Yavapai-Apache Tribe, the Havasupai Tribe, Rex Tilousi, Dianna Uqualla, the Sierra Club, the Center for Biological Diversity and the Flagstaff Activist Network in their lawsuit. He expressed his concern about the reactions to the legal decision.

"I have been very concerned about what people have been saying about this case," Shanker said, referring to the negative press and statements coming from Arizona Snowbowl, various business people and other individuals from the Flagstaff area. "These statements have ranged from, 'The tribes just want to put a casino up there,' to, 'Why don't the Native Americans go back to China where they come from?'"

Looking out at the multicultural crowd, Shanker said that he was glad that there are people from all walks of life in Flagstaff, and was reassured by the positive response from the greater part of the community.

"Racism and hatred should not be playing a role in this decision," Shanker added.

Robert Tohe, also with the Sierra Club, told the crowd that the court decision addressed the question of how individuals view water and how it is to be used, and that he was proud to have been part of the battle. "In retrospect, our children will see that we did something more responsible than others have done," Tohe said.

"This is what justice feels like," Bessler announced triumphantly. "I think this legal decision is one of the top five cases affecting Native American rights."

Gary Nabhan, noted ethnobotanist and director of the Center for Sustainable Environments at Northern Arizona University, echoed Bessler's announcement by naming the decision as one of three miracles he has seen since his arrival in Flagstaff.

"One was stopping Peabody, another was the plans to mess with the Zuni's Salt Lake, and then there's the Sacred Peaks." Nabhan delighted the crowd by announcing, "Actually, we should now call it the 'Eaks,' because we've taken the 'P" out of the Peaks!"

Nabhan went on to express his delight with the language he thought he would never hear someone so high up in the government say.

"The judges said that water is sacred. The judges said that everyone deserves the dignity to practice their religion. The judges also said do minimal harm to the earth and to traditions," Nabhan said. He went on to comment on what he said might be an inappropriate name-the San Francisco Peaks-but that the identification with Saint Francis, the patron saint of ecology, was very appropriate.

"St. Francis received a message from [the Creator] to 'restore My church.' So St. Francis went out and found a little dilapidated chapel where animals were being kept, and he restored it. But then the Creator said, 'No, not that one. I was talking about the Big One.'" The Peaks, Nabhan said, are "the Big One. We need to remind folks that things need to be restored and healed."

Nabhan went on to suggest that the 13 Arizona tribes that hold the Peaks sacred be given co-management authority with the Forest Service over them.

"Tribes have been given this authority in other parts of the country," Nabhan said. "The welfare of the Peaks is too important to be decided by one group or nationality."

Serena Dawakuku of Kykotsmovi added a Hopi voice to the gathering.

"I am so proud," Dawakuku said. "The Peaks are where the Katsina live. We pray for the whole world, not just the Hopi. I am proud that I have a daughter with the Black Mesa Water Coalition...I just wish our leaders would stop doing things behind our back."

Norman Brown, filmmaker and one of the founders of the Diné Bidziil Coalition, expressed that the decision was not just one for Native people, but for all people of faith and prayer.

"This decision has raised prayer above the law," Brown said. "It is a victory for our elders, some who have been involved in an 80-year fight. This decision relieves the stress of our elders in the canyons, the deserts and the mountains-some who died waiting for this."

"I think the Flagstaff City Council owes us an apology for the stress we have been put through," Brown added. "No other race has [had] to go to court for freedom of religion. No other religion has [had] to prove in court that their prayers and ceremonies are as strong as others."

Danny Blackgoat, son of the late Roberta Blackgoat, a world-renowned Navajo activist, described a visit to his aunt, Pauline Whitesinger of Black Mesa.

"I was talking to my aunt, and I was telling her about the planned use of recycled water. She got real quiet, and then finally said, 'How insane are those people getting?'"

Klee, Clayson and Jeneda Benally were honored by Bessler for their untiring work in the Peaks issue. Clayson Benally performed an impressive hoop dance accompanied by his father, Jones, Jeneda and Klee. All expressed their delight with the decision.

Other individuals who spoke included American Indian Science and Engineering Society (AISES) Elder Council member Franklin Kahn and Dr. Paul Torrence, the Northern Arizona University hydrologist who provided the evidence that reclaimed water could impact human health if consumed. "What happened here in Flagstaff was a template to be used by the whole world," Torrence declared.

Shelby Raye, representing Youth of the Peaks, said that, "It happened because we made it happen." She advised Native youth to use their tools wisely-"The media, the Internet, MySpace-whatever it takes."

Jamescita Peshlakai, who represented the Peshlakai Foundation, an organization concerned with the preservation of Native dance, language, culture and music stated, "This ruling is a wake-up call to those not present. What we do affects not only the least members of our world, it affects as all."

Finally, Kelvin Long-the director of ECHOES (Educating Communities While Healing and Offering Environmental Support)-proceeded over what was thought to be Flagstaff's largest friendship round dance.

"Thank you for standing out here in the cold," Long told supporters. "Thank you for the celebration. Let's continue to celebrate the rest of our lives. Thank you for knowing that we are here."