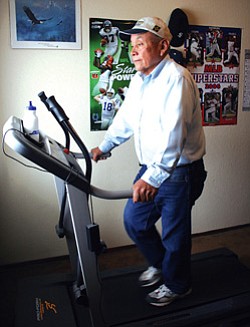 TEEC NOS POS-Herbert Peterson Sr. suffered a heart attack in 1990 and was diagnosed with pre-diabetes, but by listening to his doctor, having strong family support, and changing his lifestyle, he is happy to be alive today.

"After I suffered my heart attack, the doctors found out that my arteries were plugged up," said Peterson at his home nestled near the foothills of this northern Navajo community. "Eventually, I had to have bypass heart surgery and my veins were replaced. My doctor also told me that I was in pre-diabetes stage. I changed a lot about my life from eating to exercising, but it has all been good for me."

Peterson said that it is good to have a son who is educated to help him and supporting wife, Marie, who cooks healthy foods for him on a daily basis.

"Our son, Tony, has been a real help for both of us," Marie said. "He tells us what we should eat and what kind of exercises we need to do. He does research on his computer and let's us know what is good for us."

Peterson said that before his heart attack he ate a lot of food without concern about his health and what he was doing to his body. Since then, he has learned plenty about nutrition, diet, exercise and the need to listen to his doctor.

From time to time, Lena Guerito, a nutritionist with the Navajo Nation Special Diabetes Project, Shiprock sub-office visits the local Senior Center and provides nutrition education. This has helped Peterson and his wife in learning more about healthy foods and diet. On this snowy day, Marie served some Navajo herbal tea without sugar from a kitchen that had vitamins, pure vegetable oils, wheat bread, and Mrs. Dash on the counter.

"My wife prepares food now that is healthy, without fat, grease, and salt," Peterson said with a chuckle. "We learned that you can steam-cook vegetables as well as prepare meat without fat. I eat more fish today than I did before."

Marie said that Herbert participates in "Just Move It" walks and is on the move daily. "He even walks down to the pasture to feed the cows," Marie said with a smile. "He has a treadmill here in the house that Tony got for us."

Tony said that he is always concerned about the health of his parents and tries to encourage them with their diet and exercise. "My dad wanted to start running along the road and to walk up the mountain trail, but I told him that he might sprain an ankle and nobody would be there to assist him," said Tony. "I got them the treadmill and it's set up here inside the house along with my weight-lifting equipment."

Peterson walks for 30 minutes everyday on the treadmill. There are posters of athletes on the walls to encourage Tony to exercise as well. It is all a part of family support. "They don't have any excuses. They can exercise on the treadmill every day for 30 minutes. They also take their vitamins so they won't catch cold or get sick."

Marie said that as mother and grandmother she was only concerned about having food on the table for her children and grandchildren in the past. "You want to make sure they eat three times a day," she said. "I was not concerned about what was healthy or what was not. I was not aware of how much fat was in this or that, just that the food was prepared and the kids had something to eat."

She said now everything has a different value and she makes sure everything is healthy and prepared in way that is good for her and her family.

Peterson said that the problem with many Navajos is that they don't listen to their doctors and that they still eat a lot of mutton, fry bread, and greasy foods.

"When you drive into Shiprock and come to the intersection, there are a lot hamburger places there," he said. "There's Burger King, McDonalds, Sonic, That's-a-Burger, and down the road, Chat and Chew. People just are not aware of how much fat they are eating, and then they are surprised when they are told they have too much fat in their blood veins."

It was mid afternoon when he got on the treadmill for his daily walk, content to keep himself healthy.

Guest column: You may be thin, but are you healthy?
Secret to overcoming obesity passes through northern Arizona
Learn about cholesterol and take control of your heart's health
The good and the bad - eating for health
Healthy living tips for families
Event Calendar