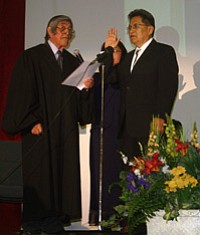 KYKOTSMOVI-From throughout the Southwest leaders, individuals, citizens, family and friends gathered to witness Ben Nuvamsa's inauguration as the new Hopi Chairman. Held at the Hopi Veteran's Memorial Center on March 21, hundreds of supporters turned out for the inauguration ceremony. Presenting the opening blessing was former Hopi Chairman Ferrell Secakaku who encouraged unity and peace in the Hopi community.

Vice Chairman Todd Honyaoma spoke of the need to "put disagreements behind us and work together to move things forward." Honyaoma discussed his excitement in the future and intention to demonstrate that the staffs of the Chairman and Vice Chairman are a unified, accountable, and supportive team that will work with the Hopi Tribal Council to serve as the voice of the Hopi/Tewa Sinom.

Delivering the keynote address was White Mountain Apache Chairman Ronnie Lupe reminding those in attendance of the strong Native leaders who worked tirelessly in generations prior including Vine Deloria Jr. and those who headed the American Indian Movement occupation of Alcatraz in 1969 and Wounded Knee in 1973.

In an inspiring speech, Lupe focused upon the similar strengths of Chairman Nuvamsa and the power Native nations hold in working together through continued struggles in protecting their lands and cultural resources from U.S. appropriation and manipulation.

Following this speech, a benediction ceremony was conducted by University of Arizona Professor Emory Sekaquaptewa.

Chairman Nuvamsa then presented his plans for the future to the public for the first time as Hopi Tribal Chairman. Nuvamsa detailed his plans to begin listening sessions with Hopi tribal members immediately with the first session being held Friday, March 23 at the Native American Community Health Center in Phoenix. Nuvamsa explained that these meetings would hold the keys to Hopi future development, updating of the constitution, the Code of Ethics for all tribal officials and the Potsquaniat. He said that the approach will be grassroots and changes will be initiated directly from the villages and Hopi/Tewa people.

Chairman Nuvamsa brings to the tribe many years of knowledge and experience in PL-638 Indian Self-Determination and Education Assistance Act. He was also directly involved with the work to improve the Bureau of Indian Affairs programs and other programs assumed by tribes by participating in the policy formulation process as superintendent of the BIA for the Fort Apache Agency.

The next listening session is scheduled for 6 p.m., Friday, March 30, at the Museum of Northern Arizona in Flagstaff. For more information call the Hopi Chairman's office at (928) 734-3100.