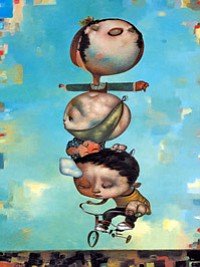 FLAGSTAFF-Once again, the now well-established, internationally recognized Northern Arizona Book Festival presents a spectacular weekend of dynamic and truly diverse authors from all points of the literary globe in Flagstaff, April 20-23. A special week of free events to celebrate this very special Bookfest will take place from April 16-19, as well. Tickets are now on sale.

Native American storyteller and author Geri Keams will join the festivities again this year, as will musicians Karl "The Irish Rover" Jones, Tom Taylor and Rob Dutton, as well as Rev. C.C. Pearlblossom and the Unopened Letter.

Innovative programming this year includes the new "Young Authors Festival," in partnership with the Northern Arizona University (NAU) College of Education and the Cline Library Auditorium. Events include a free screening of "Mambo Kings," based on the novel by Oscar Hijuelos, and a special tribute to the late Jim Simmerman. A special presentation by the first Lacapa Spirit Prize winner will also take place.

Books by the featured authors will be available for sale at the Weatherford Bookfest Headquarters through the entire Bookfest weekend and may be signed by Bookfest authors. Flagstaff artist Joe Sorren will be on hand to sign 2007 Book Festival posters.

As always, the Festival will collaborate with community arts and educational organizations throughout the week as they do all year, creating a city-wide atmosphere that celebrates a love for books and the authors who make them. The Festival works closely with public schools to introduce students to writers and book illustrators; popular free bookmaking workshops are open to all ages.

Admission prices include $3 for panels and $5 for readings. A weekend ticket is $25, and a Friend of the Festival ticket, which includes a weekend pass to all events, a Book Festival poster, and entry to the Festival's authors' reception, is $50. Reserved seating passes that include all "Friends" perks in addition to the Jerry Riopelle Concert are limited, and must be purchased in advance. All single-event tickets should be purchased in advance. All passes and tickets can be purchased online at www.nazbookfestival.org, or by phone at (928) 380-8682. Tickets will be available the week of the festival at The Weatherford Hotel, the Wine Loft (in the evenings), Fire on the Mountain Glassworks and the Orpheum Theatre box office during the Festival. Festival proceeds will benefit the work of literacy programs in the community.

The Northern Arizona Book Festival was founded in 1998 by the Literacy Volunteers of Coconino County as a link between literacy efforts and literary endeavors. The Festival celebrates a love of books and their authors as well as the readers who read them. For more information about the Festival, visit the Northern Arizona Book Festival's Web site or contact the new executive director, Rebecca Byrkit, at rbyrkit@nazbookfestival.org or 928-380-8682.