Chamber of Commerce looks to ride the "waves of progress" 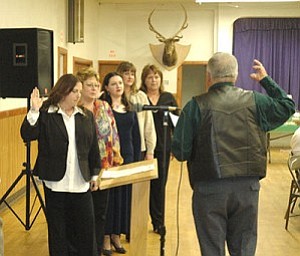 Last Saturday, the Winslow Chamber of Commerce held their annual dinner and installation of officers at the Elks Lodge. The Chamber spoke of the past year's accomplishments, announced their new board members, spoke of what to expect this coming year, gave their position of the bed tax and talked of the coming waves of progress for Winslow.

The first wave of change for the Chamber of Commerce is their board. Theresa Warren stepped down as Chamber president to become secretary, and Bill Lawler, a Chamber member since 1984, reassumed the office of Chamber president, which he held previous to Warren. Jim Currier is now vice president.

Winslow Chamber of Commerce Director Bob Hall noted this past year's accomplishments as being: the Vienna Boys Choir; the marketing seminar; a customer service workshop; a new Chamber Web site; the Fourth of July celebrations; the business expo; hosting the Prescott Ambassadors; an EPA Brownfields conference; sponsoring and promoting Railroad Days; sponsoring the Just Cruisin' Car Show; sponsoring Standin' on the Corner; sponsoring various sports tournaments; a successful representation at the Arizona Travel Show; another 911 ceremony; a new billboard south of town, an Arizona Department of Tourism grant with Holbrook and the Petrified National Forest and lots of advertisements for visiting Winslow.

Warren and Lawler spoke highly of Hall's ability as director and thanked each other for their dedication and work as executive board members.

Lawler said to look forward to the changes coming for Winslow and that this summer Winslow will be a pit stop for the Great Race, a popular cross country automobile event, which will be here in August.

"The Just Cruisin' Car Show will be apart of that," Lawler said. "We'll also be putting giant 8 x 6 Route 66 logos along Second and Third Streets."

He said to expect to see a new visitors and relocation booklet coming out soon and that they will also be moving into the Hubbell building, and will be coordinating with the city of Winslow to establish a museum in it. The Chamber has also changed its bylaws.

Lawler took some time to speak about the current Bed Tax in Winslow.

"The Bed Tax and the Winslow Chamber of Commerce, the two are totally different," he said.

The Chamber of Commerce is a business alliance and the Bed Tax is spent to promote tourism in Winslow.

"This is a really nice situation. Be sure to vote for it since these funds are used in Winslow," Lawler said.

He added by saying that Hall is doing such a great job that other communities have tried to hire him. Lawler also commended City Administrator Jim Ferguson.

Ferguson then spoke, giving a speech proper to a consummate politician. He described being out in the ocean like being in Winslow, where the "waves of progress" begin far out on the horizon.

He said things are not always as they seem and there are things going for Winslow that people may not be aware of, or may not be quick enough for some, but that they are happening.

"Ten thousand people a day move into the Phoenix area and as the price of property goes up there and in places like Flagstaff and Sedona, people will still be looking for a place to live where they can raise their family," Ferguson said.

He said where once Winslow only saw a handful of home building permits each year, they are now looking at 1,200 units being proposed. He cited this and others things like Mike's Pike Development and the Renaissance Phases as examples of these waves coming through, and said that it is up to the residents to be the wind that pushes these waves.

He also spoke of the City's new neighborhood clean-up program to try and help the residents change their image to visitors. He also encourages residents to speak with their elected Council members.

"Think about what you want to do because this community will only improve if we all work together," he said.

Hall also announced that he is working with Ferguson and the City to create an economic development team.