Busy year and a new board for Winslow Historical Society 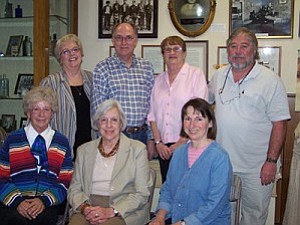 At the March 9 meeting of the Winslow Historical Society (WHS) Board of Directors, a slate of officers for 2007 was elected. Sue Tecklenburg was reelected as president; new officers are Mary Heldt, vice president; Docia Blalock, secretary; and Pat Raygor, treasurer.

The board is comprised of nine members, six of whom were elected at the annual dinner held Feb. 23, at the Falcon. Newly elected to the board are Docia Blalock, Donna Guiher, Mary Heldt and Mike Lawson. Elected to succeeding terms are Dan Lutzick and Bert Peterson. Board members with one more year to serve are Pat Rayor, Bert Sorensen and Sue Tecklenburg.

Old Trails Museum, owned by WHS, is the public face for both organizations. The report of 2006 activities was presented at the annual dinner, and revealed a year of activity and growth. During the past calendar year, 4,007 visitors signed the guest book, hailing from 23 countries and all 50 states. These figures are likely underreported as some prefer to not register.

The museum is currently staffed with one full time employee, so the need for volunteers to lend helping hands is essential to the operation. From April through December, a conservative estimate for hours volunteered are 765.

The museum has completed or is working on several grants. Some of the improvements made because of these are scanning and preserving of archives, cataloging artifacts and archives on a computer with museum software and securing units for archival storage.

In addition, OTM has 51 items in its "Collection Highlights" on the Arizona Memory Project, a virtual exhibit of the Arizona State Library, Archives and Public Records. In addition to these, work is currently in process to add an ATSF Railway collection to the Memory Project. This should be complete by June.

In celebration of Archives Month in October, the state library published a poster entitled "Arizona at Work." An OTM photo of branding by Hashknife cowboys was selected as one of nine from a field of 120 submissions.

OTM is one of six rural museums in Arizona selected to host "Between Fences," a traveling exhibit in the Museum on Main Street division of the Smithsonian Institution. Our time slot starts June 21 and runs for six weeks. Meetings on the project began in 2006, and several more are scheduled before opening day.

Publicity in the form of articles provided more awareness of Winslow of today. Some publications are The New York Times, Arizona Highways, and Northern Arizona. There was also a favorable article in Failure Magazine which focused on Route 66.

With all these developments and growth, OTM is poised for an even bigger year to come.