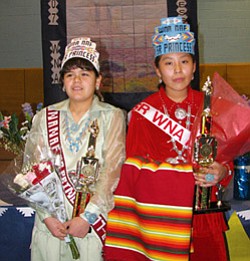 This year, the junior and senior divisions competing for this year's crown demonstrated a variation of modern and traditional talent. The Native American Festival was sponsored by area schools and comprised of a week full of festivities including a pageant, song and dance, and powwow.

Peterman, a sixth-grader from Kayenta Community School said she was "excited" about the win.

She stated that she would like to move on to the next level and compete at other pageants. Cheyenne is the daughter of Anthony and Corinne Peterman.

When asked about her crown, she said, "It was a shock and I was surprised." This was Henderson's first entry at any level of pageant competition. Her sister former 2006-07 Miss Greyhills Larue Henderson was on hand to support her sister's accomplishment. Larue said, "I am happy for her."

Ilana is a seventh-grader at Tuba City Boarding School. Her parents are Virgil and Elrina Henderson of Tuba City.

All the first place winners in this year's Western Navajo Agency Powwow will travel to Shiprock, N. M. to attend the Navajo Area Native Festival. The date of this powwow has yet to be determined.