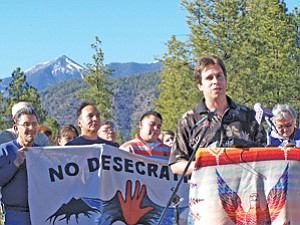 WINDOW ROCK-In a precedent-setting sacred sites case, the 9th Circuit Court of Appeals on Monday ruled in favor of the Navajo Nation, the Hopi Tribe and others in their effort to protect the sacred San Francisco Peaks from desecration.

In its 70-page decision, the appeals court reversed a Jan. 11, 2006 decision by U.S. District Court Judge Paul Rosenblatt allowing the expansion of the Arizona Snowbowl and the use of sewage effluent to make artificial snow. Most significantly, the appeals court ruled that the U.S. Forest Service violated the Religious Freedom Restoration Act (RFRA) by permitting the plans, and failed to fully comply with the National Environmental Policy Act in its evaluation of it.

"If Appellants (the tribes) do not have a valid RFRA claim in this case," wrote Judge William A. Fletcher for the court, "we are unable to see how any Native American plaintiff can ever have a successful RFRA claim based on beliefs and practices tied to land their hold sacred."

As the news circulated by phone and e-mail, Navajos everywhere were overjoyed. Upon hearing the ruling, Navajo Nation President Joe Shirley said he was elated, and that he had never given up hope.

"Medicine people will feel the same way I do, happy," he said. "The Religious Freedom Restoration Act had never been tested. So I think this is a precedent-setting decision. Now tribes out there have every means of protecting their sacred sites, especially now that the law has been proven, and I just really appreciate the judges deciding in the way that they have."

Howard Shanker, attorney for the Navajo Nation and several other tribes in the case, said the ruling is especially important because an earlier case, Lyng v. Northwest Indian Cemetery Protective Assn., held that Native Americans did not have First Amendment rights when it came to federal government land use decisions.

"Essentially, Native Americans have had no recourse challenging government land use decisions which oftentimes impact sacred sites and culturally significant sites," he said.

"What we've done here under the Religious Freedom Restoration Act is we've created an avenue for tribes to protect those sites that are sacred to them that impact their exercise of religion."

This is the first case in which RFRA has been successfully used in an appeal, Shanker added.

"So it's extremely important," he said. "Tribes all over the country can benefit from this decision and utilize it to protect sacred and religiously significant sites. This is a tremendous step forward in preserving Native American cultural and religious beliefs."

The Navajo Nation, Hopi Tribe and other plaintiffs sued the U.S. Forest Service over its decision to allow the Arizona Snowbowl Resort to expand its ski area over 100 acres of rare alpine ecosystem.

Additionally, the proposed plans would have allowed Snowbowl to make artificial snow from treated sewage effluent. To do this, a 10 million gallon storage pond would have been constructed on the mountain and a 14.8-mile long pipeline from the Rio de Flag wastewater treatment plant would have been built.

RFRA states that the federal government "may not substantially burden a person's exercise of religion." The court noted that the 1993 law "provides greater protection for religious practices" than earlier U.S. Supreme Court cases had allowed. It said the district court erred by disregarding an amended definition of "exercise of religion."

"We conclude that the (tribes) have shown that the use of treated sewage effluent on the Peaks would impose a substantial burden on their exercise of religion," the court said. "This showing is particularly strong for the Navajo and the Hopi."

Because of that finding, the court said, it was unnecessary to pursue the question in regard to the Hualapai and Havasupai, which held similar spiritual views regarding the mountain.

"The (Forest) Service has acknowledged that the Peaks are sacred to at least 13 formally recognized Indian tribes, and that this religious significance is of centuries duration," Judge Fletcher wrote.

The court also found that the Forest Service "neither reasonably discusses the risks posed by the possibility of human ingestion of artificial snow made from treated sewage effluent nor articulates why such discussion is unnecessary."

The court noted that the final Environmental Impact Statement (EIS) explains that the "often euphemistically called reclaimed water" does not produce pure water but has detectable levels of enteric bacteria, viruses, and protozoa, including Crytosporidium and Giardia. Noting that the Arizona Department of Environmental Quality (ADEQ) approved the use of treated effluent for snowmaking in 2001, it said ADEQ "requires that users take precautions to avoid human ingestion," and that Snowbowl would have been the first ski area in the country to make snow entirely from undiluted treated sewage effluent.

The court found that the use of effluent, and the resulting physical and spiritual contamination of natural resources, constituted a burden on the exercise of religion by the various tribes. The burden exists, it said, "because the practices require a belief in the mountain's purity or a spiritual connection to the mountain that would be undermined by contamination."

"The Forest Service itself wrote in the final EIS that the Peaks are the most sacred place of both the Navajo and the Hopi; that those tribes' religions have revolved around the Peaks for centuries; that their religious practices require pure natural resources from the Peaks; and that, because their religious beliefs dictate that the mountain be viewed as a living being, the treated effluent would in their view contaminate the natural resources throughout the Peaks," the court said.

The court also found there was no compelling governmental interest to allow artificial snowmaking. Because the ski area has relied on natural snowfall since 1938, the court said the record does not support the conclusion that the Snowbowl would go out of business if the proposed expansion does not proceed.

"We are struck by the obvious fact that the Peaks are located in a desert," the court said. "It is and always has been predictable that some winters will be dry."

President Shirley said the ruling was critically important to Native people because it helps preserve their culture and way of life.

"Whatever you do as a government, as an organization, as a people, when you start picking at sacred sites, or chipping away at culture, what ultimately happens is it's a chipping away at a way of life," he said. "Genocide might be a very strong word but that's what comes to mind. As a people we don't want to die."

"My dream, my hope, my prayer for my people, my young, my Nation, my way of life, is that 100 years, 500 years, 1,000 years down the road I'd like to continue to believe that Navajo people are still here, talking the Navajo language with our culture, our way of life, that's my hope, that's my prayer," he said.