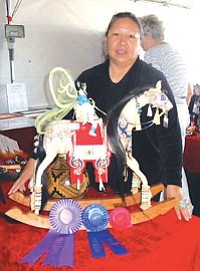 Artisans competed for prizes in several categories. Best of Show was given to Imogene Goodshot Arquero, Oglala Lakota artist from Santa Fe, N.M. for her sculpture "Native Mystics." A winged Native fairy riding a large mythological rocking horse was a showstopper for her exquisite beadwork on hand tanned leather. Arquero explained that the fairy rider had no face and only a mask. "Our tribal rules do not allow doll makers to include faces on their dolls and I wanted to make her even more mysterious with a mask," said Arquero.

Arista La Russo, designer of Native fashion, jewelry and accessories was awarded Best in Class and Category in Cultural Clothing for her handmade silk brocade and velvet-trimmed jacket. The collar utilized a stairstep design with beaded edge.

Master painter, illustrator and sculptor Bahe Whitethorne Jr. also won Best in Class and Category for his four-sided bronze sculpture entitled "Messenger." The sculpture mounted to a spin disc displayed abstracted patterns on the other sides in colors reminiscent of landscape.

Visitors were entertained with several bands and musical groups including Tyrone Duwenyie's "Over the Ledge" band. Everything from Native-inspired music to Johnny Cash and the Beatles kept the atmosphere one of lighthearted fun, song and dance. Duwenyie (Hopi), and his group are popular Valley musicians and perform often in such venues.

As the audience enjoyed fry bread and cold drinks the beat sounded for the entire weekend. Children played inside and around the colorful teepee set up to greet customers.

This show appears to be growing in part because of the willingness of artisans to share their tribal heritage and art. Snowbirds from the Midwest and East Coast enjoy the warmer weather and locals flock to the event also.