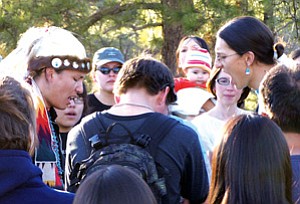 At a March 12 press conference held at Buffalo Park in Flagstaff Klee (left) and Clayson Benally lead a victory song in support of the day’s ruling to prohibit the use of reclaimed sewage water to make artificial snow on the San Francisco Peaks (Photo by Wells Mahkee Jr./Observer).

FLAGSTAFF-On Monday, March 12, the 9th Circuit Court of Appeals in San Francisco, Calif. issued its ruling to protect a mountain held holy by more than 13 Native American Nations. A local ski resort planned to expand and use treated waste effluent to make artificial snow on the slopes of the San Francisco Peaks. The peaks have been at the center of a historical and lengthy battle that has pitted economic interests on public lands against environmental integrity, public health and cultural survival.

A federal court appeals panel issued the unanimous decision written by Judge William A. Fletcher. "We reverse the decision of the district court in part. We hold that the Forest Service's approval of the Snowbowl's use of recycled sewage effluent to make artificial snow on the San Francisco Peaks violates RFRA (the Religious Freedom Restoration Act), and that in one respect the Final Environmental Impact Statement (FEIS) prepared in this case does not comply with NEPA (the National Environmental Policy Act)."

On the day of the ruling, more than 100 supporters gathered at an afternoon press conference near the base of the sacred peaks to celebrate the ruling. Tribal leaders, environmental groups and representatives of the Flagstaff-based Save the Peaks Coalition spoke of the victory.

"This is a very important decision that sets great precedent for people who are concerned with Native American rights and religious freedom" said Howard Shanker of the Shanker Law Firm, PLC. Shanker represented the Navajo Nation, the White Mountain Apache Tribe, the Yavapai-Apache Tribe, the Havasupai Tribe, Rex Tilousi, Dianna Uqualla, the Sierra Club, the Center for Biological Diversity, and the Flagstaff Activist Network.

"Because of this decision in the 9th Circuit [Court], other tribes throughout the nation could have the ability to rely on this case to help protect sites that are sacred to them and [are] culturally and religiously important," Shanker said.

Shanker added, "The other thing that this court recognized in this decision, which is important for all of us in Arizona, is the fact that A+ treated water is not (emphasis added) potable water. You can't drink it."

The 64-page ruling also stated, "If Appellants do not have a valid RFRA claim in this case, we are unable to see how any Native American plaintiff can ever have a successful RFRA claim based on beliefs and practices tied to land that they hold sacred."

Ben Navumsa, recently elected Chairman of the Hopi Tribe stated, "The Hopi Tribe is immensely gratified by the 9th Circuit [Court] decision, which explicitly recognizes the Hopi Tribe's deep spiritual, traditional and cultural connection to the San Francisco peaks which we call Nuvatukaovi."

"The making of snow with sewage on the home of the kachinas was a dire threat to the centuries old link between kachina, Nuvatukaovi and the Hopi. The 9th Circuit decision recognizes the importance of the Hopi's bond to the mountain and protects that bond. In so doing, the decision of the court ensures Hopi people's ability to continue their way of life," he said.

Jamie Fulmer, Chairman of the Yavapai Apache tribe stated, "We are gratified to learn that the appeal has been won. The San Francisco Peaks are a sacred mountain to us as we testified during the appeals hearing. We are honored to know that our Native voice is still heard. This decision by the federal appeals court tells us that even in the current environment of development at all costs the United States appeals process stands for justice and the American justice system is capable of doing what is right when the facts are fully known."

He added, "This is not just a victory for our elders and tribal traditions, but for all people of faith across the country. This confirms to us that when a few stand up for what is right everyone benefits."

Navajo Nation President Joe Shirley Jr. stated, "What I think this ultimately means is that it goes towards that, preserving our way of life, preserving my prayer, my sacred song, my sacred sites, my mother - the San Francisco Peaks. Years have been added to my life. I can't express how happy I am. As a people, we're elated."

Judge William A. Fletcher stated, "We are unwilling to hold that authorizing the use of artificial snow at an already functioning commercial ski area in order to expand and improve its facilities, as well as to extend its ski season in dry years, is a governmental interest 'of the highest order.'"

Rudy Preston of the Flagstaff Activist Network stated, "Snowbowl tried to push for too much. We knew that the lower court ruling was wrong and we are grateful that the 9th Circuit [Court] recognized that too. We have no intentions of closing down the ski area. If Snowbowl can't manage their resort than maybe they're in the wrong business."

He added, "Snowbowl's economic arguments have been completely shattered. The court decision clearly states that Snowbowl will not go out of business if it continues to rely on natural snow. The courts and the Forest Service EIS...recognized that the ski area is not a significant driver of the winter economy of the small city of Flagstaff."

In spite of the March 12 decision, Snowbowl owner Eric Borowsky has announced the company's intention to push forward with clearing and thinning an additional 124 acres of spruce-fir forest. This project would make room for 66 acres of trails and a 400-space parking facility to accommodate a sledding and snowplay area.

"'The fight has begun. We got a radical ruling from a radical court and we're not accepting it. We're going to put a skybridge at the top of the Agassiz lift,' looking out over Flagstaff. We're going to consult with the Hualapai to see about the cost of the skybridge.'"

Borowsky also committed his intent to use clean/drinkable water rather than reclaimed wastewater to make artificial snow. Borowsky also vehemently announced his decision to appeal the ruling.

At the March 12 press conference, Klee Benally, a volunteer with the Save the Peaks Coalition said, "This has been a struggle that has created painful division in our community. The actions of the Forest Service and Snowbowl have created many wounds, but today we can say, 'Lets let the wounds heal.' We recognize this ruling upholds human rights that we have been denied for too long. We urge Snowbowl and the Forest Service to respect the ruling that has been issued by the 9th Circuit Court and not appeal."

Carly Long, of the Flagstaff Activist Network said, "Today is a triumph in the face of the ever-present threats to cultural and environmental justice and heritage. The peaks represent and hold different meaning for all people, but it is and has been evident how much support these sacred, awe-inspiring peaks have. We would like to honor the citizens who relentlessly wrote comments, came to marches and rallies, dedicated their thoughts and prayers, donated money, and stood up publicly for the Peaks. From Japan to Flagstaff and France to Massachusetts, this decision represents the concerns of world citizens and is a cornerstone in the palace of justice."

The Appeals Court decision states that the Supreme Court has repeatedly held that the constitution "affirmatively mandates accommodation, not merely tolerance, of all religions, and forbids hostility toward any...[and that] declining to authorize the use of treated sewage effluent...is a permitted accommodation to avoid 'callous indifference.'"

The decision also poignantly illustrates the unmet environmental need as mandated by NEPA. The Forest Service "does not address as an environmental impact the risk to human health from the possible ingestion of artificial snow made from treated sewage effluent."

Many of the speakers at the press conference acknowledged that there are many threatened sacred sites throughout this country.

Alberta Nells, member of the Youth of the Peaks stated, "This mountain is our mother, she is our grandparent and we're the children, the grandchildren, we hear it in our songs, in our prayers and now we can leave from this area knowing that we have made a difference in this world today. Now we can continue to walk life in beauty." As she made her statement, she repeatedly wiped away tears from her eyes.

Nells, a student at Coconino High School, also shared a story about how a schoolteacher had came up to her and said, "There is justice out there, sometimes you have to go out looking for it."

For additional information about the court ruling, please visit the Save the Peaks Web site at www.savethepeaks.org.