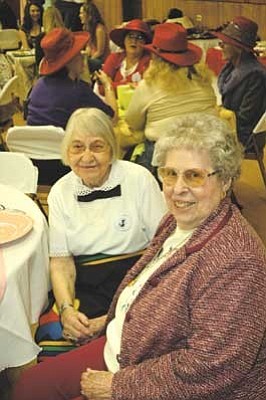 Winslow's women came out in force to show their support for the Harvey Girls fashion show and luncheon at the Elks Lodge last Saturday. Aside from all the Harvey Girls, the Elks Hall was filled with Red Hats, Soroptimists, Historical Society and Winslow High School S-Club members, too.

Vintage clothes and accessories from the 1930s and up, were on display and worn by S-Club students who were being schooled in the ways of social aptitude. All of these clothes had been worn in Winslow by women at one time or another.

"This fashion show was just to let people know who we are. Winslow does not utilize us much, " said Melodee Gutierrez, a Harvey Girl who organized the show. "The Winslow Harvey Girls are meeters and greeters, and ambassadors of goodwill for Winslow."

Chris Payne and WHG President Peggy Nelson were busy in the kitchen preparing food for the event.

Typically the Harvey Girls travel to events in Flagstaff, Williams, Belen, N.M., and the Grand Canyon National Park to make sure Winslow stays on the map.

"Winslow is a railroad town and we do not want our history to be forgotten," Gutierrez said.

"We were paid $25 a month with meals and a room in the dormitory," McHood said. "Those were good wages, especially during the Great Depression."

Raffle prizes were also donated by businesses and given away.

When asked if they would come back next year, the crowd resounded an astounding "YES!"