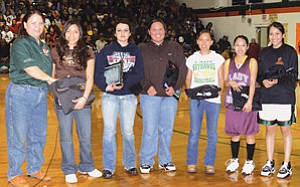 "The students are nominated by their athletic directors, counselors, and coaches," said Bill Johnson, who coordinates the District AA and AAA awards for northwestern New Mexico, and works as a Master Systems Operator for the NTUA Crownpoint office.

"The selections are based on grade point averages, school attendance, coachability, and general positive attitudes, both on and off the basketball courts," Johnson said. "So it's a balance between athletic ability and academic achievement. These are qualities that we believe set the foundation of sportsmanship."

A majority of the presentations in Arizona and New Mexico were made during the regional and district playoffs before thousands of Navajo area basketball fans.

"At NTUA, our core values are teamwork and respect, and sportsmanship falls under those categories," Mr. Craig said. "These awards honor students who work hard on and off the basketball court, demonstrating that academics is just as important as athletics."

The 2007 NTUA Sportsmanship Team for New Mexico and Arizona are as follows: