Green celebrates premiere of "Dance of the Warrior Mouse" 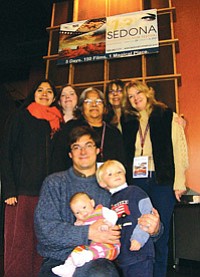 SEDONA-"Dance of the Warrior Mouse," a short documentary by Flagstaff filmmaker Susan Green, honors the Navajo and Hopi environmentalists who faced down the world's biggest government and the biggest mining company and won. This is a victory that Green compares to the Hopi story of the Warrior Mouse who saved the village chickens from a marauding chicken hawk. The film was featured at Sedona's 13th Annual International Film Festival and Workshop on Feb. 28.

Green began her work on the Colorado Plateau after learning about PL 93-531-the relocation law-and the environmental issues surrounding the removal of Navajo and Hopi people from their homes on the one-time Joint Use Area. She presented herself to attorney Lew Gurwitz at the Big Mountain Defense office and was asked to assist as media coordinator.

It was there she met Marilynn Tewa, who worked with Gurwitz as a Hopi language interpreter for Hopi traditional elders. Tewa is featured in the film and describes how she became involved in the water issue as a representative of the Black Mesa Trust in Kyoto, Japan.

"Making this film was a long process for me, beginning with my experiences as media coordinator," Green said. "I learned how difficult it was to get across what was going on out here. I saw that we needed a more precise method to get the information out."

This realization led Green back to school, where she hoped to get the credentials she would need to write and discovered digital filmmaking-an experience that blew her away.

"I was like, wow! Theater in a box! I can do this all by myself," Green said.

Though she admits that it wasn't quite as easy as it all sounded, Green distinguished herself, winning an Emmy in 1998 for her music video, "Circle of the Path," a song she wrote and recorded to honor the 500 years of resistance of the indigenous people of North America. This song was re-recorded for "Dance of the Warrior Mouse." Green also produced and edited "Mother Water," screened at the 2003 World Conference on water in Kyoto, Japan.

During her work on the relocation issue, Green quickly realized the important environmental issues woven into the so-called land dispute-especially the use by Peabody Coal Company of pristine N-aquifer water to slurry coal from Black Mesa to the Mohave Generating Station in Nevada.

"There were Hopi people who saw the writing on the wall in the 1970s-Mina and John Lansa, David Monongya, and others-about the water issues," Green said.

Later, lots of people poured their energy into the relocation issue, including non-Indian supporters both on the land and networking across the land, putting out the call for letter-writing campaigns and other efforts, but the Navajo and Hopi-people who never imagined themselves as leaders-eventually fell into that role.

These people included elders Roberta Blackgoat, Katherine Smith, Thomas Banyaca and Vernon Masayesva. They were joined by younger adults like Marilyn Tewa, Danny Blackgoat, Betty Tso, Leonard Selestewa, and younger still, Wahleah Johns, Lillian Hill, Lyle Balenquah, Enai Begay and others. Some of these individuals are featured in "Dance of the Warrior Mouse."

Danny Blackgoat speaks about his mother, Roberta, and her efforts to stop relocation and use of N-aquifer water. Roberta spent the last 35 years of her life on this effort-something that Danny speaks about in the film. Leonard Selestewa of the Black Mesa Trust talked about the Warrior Mouse and how it relates to the victory against Peabody.

Also featured are Waleah Johns and Enai Begay, young Navajo women who have been involved in the issue since childhood, and Andy Bessler, who serves as the Environmental Justice director of the Flagstaff chapter of Sierra Club. Bessler learned about the issue while in college, and began volunteering his time to battle relocation and resource depletion.

It is a celebratory film-but there is a deeper reality that Green has yet to focus on.

"I wanted to focus on the positive victory-Peabody Coal is off N-aquifer water, Green said. "I didn't want to scare people off, but I am looking to develop 'Dance of the Warrior Mouse' into a feature length documentary. My vision for that leads into other serious problems surrounding issues-dastardly things that happen when people relocate, the devastation of culture, the involvement of Cointelpro (an FBI-based organization involved in political investigations, charged by many with the conduct of fraudulent investigations designed to discredit people) designed to further separate people."

"Mother Water" began as a class project between Green and Leanne Lucero-the daughter of old-time friend Tewa. Fellow students at the Zaki Gordon Institute for Independent Filmmaking in Sedona, the pair began working on telling the story of the drying up of traditional Hopi and Navajo springs. Tragically, on the very day that Lucero viewed the first version of "Mother Water," she perished in an automobile accident. Green now saw the film as something far more important and was determined to finish it in memory of Lucero.

Lucero's mother-Tewa-appears in both films.

Green first became acquainted with the Warrior Mouse at the Museum of Northern Arizona. A prominent Hopi artist illustrated a little book written in the late 1940s. It is written in Hopi on one side, English on the other. It tells the story of a village with little hope in defeating a horrendous chicken hawk-but a little Warrior Mouse decides to take him on.

"The little mouse decided he would do it, so he kept dancing, praying, fighting [and] challenging that chicken hawk, and one day he taunted that hawk to attack him. But the Warrior Mouse had a spear, and he stepped aside and the hawk was killed," Green said. "This victory is like that-a little group of people like that Warrior Mouse-and even though Peabody is not completely gone, it has been stopped from taking the water just like the chicken hawk was stopped from taking the village chickens.

"The Warrior Mouse...is not a Katsina, and as such, it is available to the public to embrace without violating something sacred," Green said.

Viewing Susan Green's "Dance of the Warrior Mouse" was very personal. Green's short documentary was viewed by Phyllis Hogan, Lillian Hill, Andy Bessler and his family, along with a few friends as well as Green and Tewa. They were perhaps the only individuals in the crowded theater who viewed the stars of the documentary as old friends. Seeing it was like participating in an activist family reunion-like taking a bow at the end of a long-running Broadway production. It is indeed a celebration of a great victory, one which Green is a well-deserved stakeholder in.