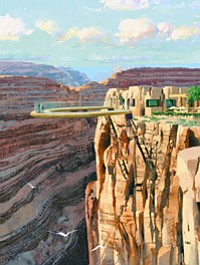 GRAND CANYON-Part of a controversial $30 million glass-bottom, horseshoe-shaped skywalk was recently installed above the Grand Canyon on the edge of the West Rim. Despite strong misgivings from environmentalists and Hualapai tribal elders, this joint partnership between the Hualapai Tribe and skywalk designer David Jin of Las Vegas, Nev. is intended to boost tourism for the impoverished group of approximately 2,200.

As part of an agreement, the Hualapai Tribe will own the skywalk and Jin will receive a portion of the profits.

In addition to environmental concerns, some Hualapai elders and tribal members are worried that construction of the skywalk and visitor center will threaten sacred areas and burial sites.

A gargantuan feat of engineering, over one million pounds of steel was used to build the skywalk. When complete, the skywalk-extending approximately 70 feet from the Canyon rim-will be able to hold about 71 million pounds, withstand 100 mph winds from eight directions, and withstand 8.0 magnitude earthquakes within 50 miles.

While the general public is abuzz with excitement and anticipation about the skywalk, some aren't as enthusiastic. Environmentalists have criticized the skywalk saying that it takes away from the overall majesty of the Canyon.

Kierán Suckling, Policy Director for the Center for Biological Diversity in Tucson sees the skywalk as more of a visual disappointment for tourists rather than an attraction.

"Technically, the Grand Canyon is one of the Seven Wonders of the World and we should respect it," he stated. "Tourists should be able to see it as it has been for millions of years."

Suckling added that the center's main concern was to have less development on the Canyon rim. He pointed out that the National Park Service is taking steps to scale back on some of their past efforts, such as removing parking lots from the edge of the Canyon rim and concentrating on restorative efforts.

Suckling described the Haulapai's skywalk endeavor as "disappointing," adding "We are not opposed to economic development and bringing in [tourism], but the tribe can build new developments without putting them right on the Canyon rim. Building on the Canyon rim changes the Canyon forever."

The skywalk will be the main attraction of an elaborate visitor center complex that the Haulapai Tribe expects to generate tourism revenue.

"The Grand Canyon has name appeal, and since part of [our] reservation lies in that, it only seems natural that we use [it] to the benefit of [our] tribe," stated Hualapai Chairman Charley Vaughn.

Located at Eagle Point, the proposed visitor center will be a three-story building which will house a museum, theater, VIP lounge, gift shop, restaurant and bar along with private indoor and outdoor facilities for meetings, weddings and other special events.