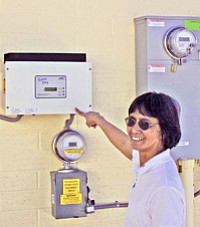 TUBA CITY-As the use of non-renewable energy sources becomes more prevalent due to its negative, long-lasting impact on the earth and its inhabitants, individuals and businesses alike search for new, alternative ways to feed the need for energy.

Those focused on the long-term impacts of present decisions are setting the trend and proving that the stranglehold of mining, mineral and natural resource extraction can be loosened almost effortlessly.

Sister Frances Vista, executive director at the Life Sharing Center, Inc. and St. Jude Food Bank in Tuba City is one of those individuals leading the way into the future, and perhaps also, creating a more respectful relationship with the environment.

"The real basic reason we're doing this is because we are volunteer run and rely upon fund-raising to support the food bank," Sister Frances said. "So we're always looking for ways to save some money."

Solar power has intrigued Sister Frances for many years as she read and learned increasingly more each month through one of her favorite magazines Mother Earth News.

"With the whole idea of grid-tie.... Well, let's just say we're giving it a try to see how it works. My hope is that if all goes well, we can put the whole food bank on solar energy," she said.

Because the food bank is located within the Arizona Public Service (APS) company's on-grid service district, the food bank is now able to generate enough energy to power its own warehouse, and also, to contribute to the APS power grid.

Architectural and Environmental Associates vice president Jason Campbell said the meter at the St. Jude Food Bank "spins both ways." This means that during daylight hours, when the sun is shining, the solar panel will power the warehouse energy needs completely.

"It's sort of like a bank where you can save energy and money," Sister Frances said.

Currently the Arizona Corporation Commission is working to establish a net metering standard to be used by energy companies throughout the entire state of Arizona. The necessary research should be complete and a net standard released by August 2008, Campbell said.

In addition to the savings generated by producing excess energy, the installation of solar energy has other benefits. For systems that are installed by firms certified in solar construction, energy companies such as APS issue rebates dependent upon the size of the project and whether it is a residential or commercial endeavor. For residential installations this can include: a $3 per watt credit per system per year; a federal tax credit of $2,000 per system per year; and a $1,000 credit per system per year from the state of Arizona. For commercial installations APS offers $2.5 per watt; a federal tax credit of 30 percent with no maximum limit; and a 10 percent state tax credit with a $25,000 cap.

Campbell also explained that the maintenance of certified installations is very low.

Although the savings and income-generating aspect of solar panels is attractive, often it's not the main reason for individuals to go solar.

"A lot of times they're not doing it to save money; they're doing it to do they're part, you know?" Campbell said.

"We have so much sun here. So why not use it? Of course I'm also doing it because it's environmentally and ecologically correct, which is something that is very akin to the spirituality of Native Americans-the ideas of Father Sun and Mother Earth," she said. "I feel these are our God-given gifts. It's there for the taking, but you take it with respect. I feel that we have to do something. We have to be conscious about the environment," Sister Frances said. "It's also one way of making use of the technology that other people have used their talents to create in a positive way."

Each month, the St. Jude Food Bank provides food for approximately 160 families, as well as various congregate meal sites, homebound individuals and food distribution sites. Sister Frances explained that the amount of money saved, and hopefully, generated through the use of solar energy will allow funds to be redirected to meet the needs of food bank clients. Recipients in need are provided with high-quality food immediately, and no eligibility requirements are imposed.

"We're here to fill the gaps. If you need food today, we give it. We serve everybody," she said.

"We have been a non-profit since 2001. Because I am very conscious of every single expense, I'm always thinking of how can we make use of what we have here? It's like creativity to infinity."

In addition to the benefits previously mentioned, Sister Francis expressed her hope that other community members will see the solar panels at the food bank and become interested in installing alternative sources of energy.

Campbell said that the St. Jude solar installation is the first that Architectural and Environmental Associates (AEA) has done on the Navajo Nation. However, in the past six years AEA has completed many solar installations throughout the region. AEA's most recent accomplishment is the commercial installation at Canyon Exploration in Flagstaff. This project consists of a 15-kilowatt panel array on a freestanding metal parking structure, which was also constructed by AEA.

"It's expected to meet about 65 percent of their energy needs," Campbell said.

According to Campbell, alternative sources of energy are becoming increasingly efficient each year. Thus, the demand for AEA's design and installation is greater than ever.

To learn more about AEA visit their website at www.aeapower.com or phone them directly at 928-214-0005.