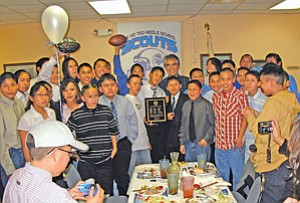 Navajo Nation President Joe Shirley Jr. (center) is surrounded by the 3A National Athletic Conference championship Tse Ho Tso Middle School football team. President Shirley acknowledged the team’s accomplishments and encouraged them to be champions in their own lives (Photo by George Hardeen).

WINDOW ROCK-Navajo Nation President Joe Shirley Jr. told the 32 Tse Ho Tso Middle School football players that he expected them to take their 3A National Athletic Invitation Conference football championship and turn it into a model to become champions of life.

"You are champions this far in your life, and I want to congratulate you for that," the President said during the Window Rock team's varsity football banquet March 2. "I'd like to see you continue to feel the championship blood in you, not only in school but then beyond that. Life. Be a champion in life. That's what I'd like to see as President of the Navajo Nation."

The President, who was joined at the banquet by first lady Vikki Shirley, told the team that sports are valuable because they teach discipline, and discipline is needed throughout life.

"You became a champion because you had resolve," Pres. Shirley said. "You were determined to be a champion, and you were persistent in that determination, and you made sacrifices. Coupled with all of that is desire."

He said that while many of their friends are just having fun, they are working to improve themselves to excel by running and lifting weights, and that was good.

But beyond this championship, he said, is the challenge to become a champion in life. That, he said, was to become an independent young person.

Errol Valteau, former Window Rock High School coach, told the team he sees pictures of "lean and mean" Navajos in photos in the Fort Defiance Hospital where he works.

"You, young men, I challenge you to be there, at Scouts Stadium," Valteau said. "You've got to work out all the time. You're building your body like a building. You're under construction. Stay away from substance. It's going to hurt you."

He urged the team to work out and not miss their chance to succeed.