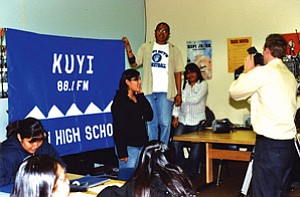 Traci Talahytewa is interviewed by KNAZ’s Brett Cox while her fellow students proudly hold up the KUYI sign (Photo by Stan Bindell).

POLACCA-KNAZ Television Channel 2 from Flagstaff, aired a segment about the Hopi High radio class on March 2.

There are 11 students in the class. Cox interviewed students Traci Talahytewa, Paul Quamahongnewa and Felix Poleheptewa.

Cox said he wanted to do a segment on the Hopi High radio class after he heard about what they do. He said he was also intrigued that they plan to attend the National Federation of Community Broadcasters meeting in New Orleans in April.

The Hopi High radio class performs the Hopi High Teen Show from 2-2:30 p.m. each Thursday where they interview community members as well as teachers, coaches, administrators and other students.

There, audio reports are posted that can be picked up by radio stations throughout the country. A Pennsylvania radio station has run Paul Quamahongewa's piece about growing up on Hopi, Stacy Koinva's commentary about what it's like to be a teenager in today's world, and Felix Poleheptewa's interview with musician Amerson Dayea.

Poleheptewa was also selected to serve on the prx.org editorial board where he is paid to review other audio segments posted on prx.org

Cox said he thinks this is a neat experience for the radio students. "I wanted to see what they were doing and what this is all about," he said.

Cox said he was impressed with how the radio students worked as a team.

"[The students] worked well together," he said. "They acted like professionals."

Cox said the Hopi High Teen Show is a great experience for the students as well as the Hopi community radio station.

"It's a great experience for the students and the radio station benefits in return," he said.

"They have a great opportunity to learn more about the business while giving their opinions and commentaries," he said.

Asked about his job, Cox responded that he likes television because it gives him a chance to show a story as well as tell it.

"My advice is that they stick with it. I'm grateful for the opportunity to come out here and I wish them the best. Hopi High is a great place," he said.