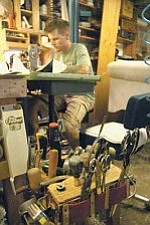 (photo by John Bianchini) In his small backyard shop, Wes Breitenback, owner of Crown Upholstery, works on chairs for a customer in Grand Canyon National Park.

On any given night, a restaurant closes in Flagstaff; whereby, Wes Breitenbach, a Winslow resident and owner of Crown Upholstery, has his window of opportunity and drives 52-miles and back to fix upholstery where there is enough commercial activity to keep him working to support his family. His hours are irregular and many times, late at night.

The city of Winslow Planning and Zoning Commission did not approve Breitenbach's request to release him from a condition in his Conditional Use Permit. Now he cannot work on Sundays, early mornings or at night for a business he owns or else he will violate his CUP and could be in danger of losing his business.

Breitenbach originally was asked by the city's planning department what hours he would work when he first applied for the CUP. He said his work schedule has never been normal, but decided to just write down the hours he stated for his customers on his cellular phone voice mail: Monday through Friday, 8 a.m. -6 p.m.; Saturday, 9 a.m.-6 p.m. No Sundays.

Breitenbach said this seemingly insignificant detail has turned into a bureaucratic nightmare where decisions seem to be made in autopilot.

Winslow resident Jim Weldon, chairman for Planning and Zoning, resigned a week before the CUP review. His letter of resignation said that he needed to focus more on his increasing business and to his work on the Charter Review Committee. This was announced by Gordon McHood, who ran the following Planning and Zoning meeting.

"Mr. Weldon issued his resignation and we were down to six members and now two are not here tonight, so what you see is what you get," McHood said.

Other than McHood, the commissioners present at this CUP review meeting were Marsha Jergens, Thomas Chacon and Jim Pate.

City Planner Paul Ferris explained to the commission that the City Council placed all CUP reviews on hold in March 2007, that they could now be reviewed and that none of these CUP holders had any complaints against them from residents.

Breitenbach approached the commission to tell them of his unique work situation with the hopes that they would consider his particular condition of working erratic hours.

"I brought this up to Planning and Zoning because I was trying to make it so I can work more and do it by the book," Breitenbach said. "If a customer calls and wants me to deliver at 6 a.m., I cannot do it because the CUP states that I cannot work until eight or nine."

He explained to the commission three times about his problem with the city's required hours and that they needed to change it. Most of what he heard in response from the commission was different versions of, "We need to protect the integrity our residential neighborhoods."

For over two years, Breitenbach has been permitted to work in his shop next to the house he and his wife bought to raise their son. They moved here from Flagstaff. This is the first time Breitenbach said his permit had been reviewed.

City Attorney Dale Patton said that in years previous, these CUPs were reviewed by city staff instead of as done now by the commission.

Breitenbach specifically asked the commission to remove one of about seven conditions on his permit so if he came back into town late at night and slept late, then he wouldn't be restricted from working past 6 p.m. or on a Sunday.

"I'm not for changing the conditions. I think it should stand as is. It is a residential area and conditions were placed on it," Jergens said.

"Wait, before you vote I want to get this straight - you are trying to tell me that I am not allowed to work on a Sunday?" Breitenbach asked. "What does that have to do with the preservation of a residential neighborhood?"

Breitenbach explained that he would like to eventually expand his business to where one day he could move into a commercial area. He added that he cannot if the city dictates that he works Monday through Friday, 9 a.m.-5 p.m. for a small business they do not understand.

Inside his small upholstery shop, Breitenbach keeps all his tools. The loudest machinery he has cannot be heard more than five feet outside his work area. He showed this to the Winslow Mail and explained it to Planning and Zoning over and over.

"From our perspective, we try to look at the community as a whole and do things like try to minimize noise. What you are saying is your business is quiet and indoors and that nobody sees or hears what you do," McHood said. "But on the other hand we have to be concerned we do not make an exception for you because then someone will come along and want some kind of exception, too."

"Correct me if I am wrong," Breitenbach said. "But isn't a CUP based on the specific condition of that one permit, that one individual and business and then every one of them are to all be considered individually and separately?"

McHood said they did not want to hear other people complain that someone else's permit has something theirs' does not.

Chacon asked if it would help if they allowed him to work on Sunday. Breitenbach said that would be better, but that it was not the point. He stated he was trying to get them to understand the big picture that Breitenbach needed to be in charge of is own hours.

"This is giving you an opportunity and the constituents we serve to preserve the quiet of a residential neighborhood," Chacon said.

"Yes, I am all about quiet residential neighborhoods. I live in one," Breitenbach said.

McHood asked Patton if they could approve all other CUPs except Breitenbach's then discuss it separately. Patton told him the commission had already done that.

Jim Pate then suggested the commission delete the condition of a required schedule from Breitenbach's permit. Neither Jergens, Chacon nor McHood, offered a second to bring the motion to a vote and it then failed. Breitenbach must work what he says are restrictive hours all because he filled out his permit application wrong. If he left it blank, he might not have the problem he has now.

Breitenbach said he is so upset about this because he always reads about how Winslow wants new business.

"If I wanted, I could not worry about any of this and move outside of town into the county and the city would lose my taxes, but I like being in town, near people and friendly neighbors," he said.