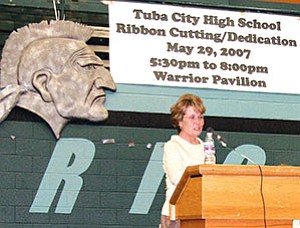 TUBA CITY- She is a welcome guest to both the Hopi and Navajo reservation communities, a woman noted for eloquence, grace, perseverance in getting work done on behalf of all students, constantly searching for excellence in academic opportunities for all of the county schools and not forgetting the far-reaching reservation areas.

Cecilia Owen, Coconino County Superintendent of Schools was one of the special guest speakers at the Tuba City High School building dedication on May 29 at the Warrior Pavilion, which featured a Navajo traditional meal along with a special presentation by Tuba City Unified School District (TCUSD) architect, Pat McGee. It showcased a personally guided tour through the new building wing that is the third phase of continual new construction TC High.

In her statement, Owen said, "Tonight, at this special dedication, we are celebrating more than just brick and mortar. We are celebrating 'intellectual capital' and how TCUSD has built on that capital for its students, communities and tribes. I have always had a special fondness for the beauty and culture of both the Hopi and Navajo reservations, but tonight, I am proud to stand next to you in celebration and recognition of the academic excellence that TCUSD continues to pursue and achieve."

The new building wing was paid for in three parts. The state of Arizona paid for the first phase, the U.S. Department of Education paid for the new current wing and the TCUSD will pay for the third phase utilizing its own investment capital.

The third phase is set to begin in fall 2007 and will include a new Reserve Officer Training Corps (ROTC) wing and a performing and visual arts wing. The fourth and final phase will include a new Olympic-sized swimming pool and small workout gym.