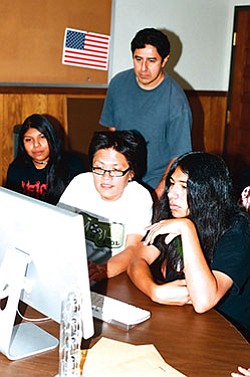 Janet Johnson, director of community relations for the Salt River Pima-Maricopa Indian Community, said the filmmaking festival is great because the students get to come up with their own story ideas.

Johnson said each student plays a role a day to put the story together. She said some of the students used their friends as extras.

Johnson said the Salt River Tribal Council approved funding for the project last year and this year's council approved it again as long as the kids stay busy in a good way.

Johnson said when the tribal council sees how the interest for this program is growing among the students that she hopes the program will be repeated next year.

The students in the film festival group range from 13 to 20 years old. The students must be in school and a member of the tribe.

"This gives students the opportunity to see Native Americans in the field," she said.

Filmmaker Annabel Wong, who is from the Salt River Pima-Maricopa Indian Community, said four filmmakers and three interns worked with 20 students to develop scripts and show the students the different stages of production as well as the hardware and software that is used for filming.

The filmmakers spent a lot of time showing the eager film students how to edit.

This is the second year this has been done on the Salt River Pima-Maricopa Indian Community.

The 20 teenagers were split into three groups to complete their film projects. Wong's group created a short film called "Brothers Vohk." Vohk is a Tohono O'Odham word for "way of life." The story is about two brothers who are opposites: One is a gangster and the other is traditional. It ends in tragedy, but there is a moral to the story.

Wong, who has earned a Master of Fine Arts in design and technology from the Parsons School of Design in New York City, focuses on teaching audio and visual design. She recently made a 17-minute film called Kewan's Song. This is a fictional narrative about a single mom whose also a violinist.

Wong, who has lived in New York City for ten years, worked as a producer in commercial photography for four years, but has recently been pushing herself more toward film.

Wong continues to study film at the New School of Visual Arts.

Wong, who went to high school in San Francisco, has also worked with students in New York City. She enjoyed working with the kids on the Salt River Reservation.

"The kids were great because they were engaged in their stories," she said. "They were interested in learning the techniques of production. They enjoyed being involved, but they were focused and they learned a lot."

Shashani Marcus, one of the interns, has already produced a 4.5 minute film called O'Odham. This short film is about what the man in the maze means to the O'Odham tribes and about the different journeys that people take through life. This short includes singing and storytelling by Salt River Tribal Councilman Ricardo Leonard.

Marcus, 23, earned a BA in filmmaking and television cinematography from the San Francisco Academy of Arts.

She wants to make films with Native Americans.

She is a production assistant intern for the American Indian Film Festival in San Francisco, which will hold its annual film festival Nov. 3-11.

"This is my first time working with kids. It's nice to be able to do that here. I'm glad that the kids have been good about showing up each day," she said.

Devanie Duwyenie, student director of the "Brothers Vohk" film, said making the film was fun, but she had to learn to speak up because she doesn't have a loud voice.

Duwyenie, a 13 year old eighth grader, said she was able to learn about cameras and film.

"Now I know how hard it is to make a movie. I have more respect for movies. It's also fun because you get to bond with the cast members," she said.

Bennie Klain, a Navajo filmmaker, said he focused on teaching the students fundamentals about making films.

"It's not easy making films as adults. Making films as teenagers has its own challenges, but the kids were really good," he said. "I'm just surprised how fast they learned. We spent two days talking about story structure, a third day shooting. All of a sudden they know camera and sound systems."

Klain noted that some of the students were in the program last year.

Klain's group made a short film about zombies. The main character loses a bet and walks off into the night.

Three students who worked on this project were Esai Perez, Dakota Joaquin and Jacob Biakeddy.

Perez, who was the student director, said making the film was good, but he was disappointed that they couldn't film at night because there wasn't enough lighting at the school.

Biakeddy, a 13 year old freshman, said it was very good.

Klain has made several short films, but is working on his first feature film called "Relocation." The main character Henry graduates from college. His mother and grandmother hop on a train from the reservation to see him graduate.

"It's a coming of age story," he said. "Henry has lifestyle issues. He needs to learn more about life than he's learned from the textbooks.

Klain recently completed a short film called "Share the Wealth." This is about a homeless woman. The government has passed a homeless tax and the woman has to spend the day trying to come up with $1.

Klain also just finished shooting a documentary called Weaving World, which is about Navajo rugweavers and their relationships with white traders.

In 2002, Klain produced the short film "Yada, Yada," which ran the festival circuit and aired on PBS. This short was about people in the U.S. who are fighting for their piece of the pie.

"We're supposed to be a melting pot, but there is a lot of antagonism," he said.

Klain earned a BS in radio, television and film from the University of Texas at Austin. He has been able to obtain grants for the films he has made.

"I haven't had to get a day job yet. I'm fortunate because that's rare," he said.

Born in Tuba City, he was raised in Tonalea and graduated from Tuba City High School. He studied communications at NAU. He interned at KGHR at Greyhills High School before reading news at KTNN in Window Rock.

That is where he learned about "Return of Navajo Boy," which is about a famous family in Monument Valley that have been photographed often, but nobody knew their story. Klain became friends with Director Jeff Spitz who hired Klain to be the producer.

Filmmaker Tim Ramos' group made a short film called "Be Aware." It's about a group of teenagers that steal a car, go to a party, end up on a desolate dirt road and run into Hoffy, a Pima legend about a half man and half horse.

Ramos, a member of the Pomo Tribe in Northern California, said the kids did a great job.

"Filmmaking is a collaborative effort and helps young people with problem solving," he said. "Filmmaking involves chaos where things happen quickly, you have to think on your feet--and they did."

Ramos said he wished that when he was in high school that he would have had the opportunity that the Salt River students were getting at this traveling film festival.

It's a huge opportunity to experience the process of filmmaking," he said.

Ramos has been working on documentaries the past eight years and has used native youth as assistants.

"These kids have gone head and shoulders above that because they did the editing. Usually kids just help out and it's not as structured as this. We needed to produce something and they did that," he said.

Marissa Johnson, a 15-year-old sophomore, served as the student director of Ramos' group. She said it was fun because she was also at the traveling film festival last year along with fellow student David Prieto. The pair lobbied the Salt River Tribal Council and received funding to attend the festival in San Francisco where they met Adam Beach along with other actors.

Johnson wants to make a career out of the entertainment business as she is interested in acting, directing and putting music in movies. She also has played the violin since fourth grade. She plays chicken scratch and classical music.

"This was great because I learned how to edit and do scenes, how to put everything in order and how to bring sound in and out," she said. "Tim (Ramos) is good to hang out with because he listens to what we want to learn and then he shows us."

The tribes pay him to produce films for their archives. He works mostly with tribes in California on language and cultural preservation issues.

"The tribes want high quality and high definition, and I can provide that," he said.

Ramos recently completed his first feature film, called "California Indian." It's about reunion and redemption. He's looking for this film to be distributed in 2008.

Born and raised in Clear Lake, Calif., he earned a BA in broadcast journalism from San Diego State before trying his hand at acting. From the acting experience, he learned that he wanted to direct and earned his MA at UCLA film school.

For more information about Ramos, log on to www.californiaindian.com.