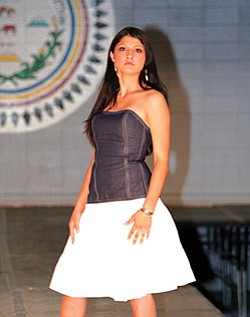 Touted as a new chapter in fashion history, the day's events boasted a great deal of talent, such as Nizhoni Way Apparel, Glacsy (pronounced glassy), Dineh Couture, Grand Falls Creations, Mildj (pronounced Millj), Designs by Cassie, and Jadí Ensembles with jewelry and accessories provided by The House of Lyndon and Nizhoni Way Apparel.

Duane Clauschee sat in the Burnside Burger King waiting for Tionne Linder from Glacsy (the second half of NuGen Productions). Neither of them had any idea what was about to happen. Two of the most influential people in Native American fashion design were about to unite their talents to bring together a collective of unique individuals the likes of which no one had seen.

NuGen Productions was founded by entrepreneurs Clauschee, Tionne Linder and Ray Linder. NuGen is an abbreviation of the phrase "New Generation" and represented the two labels-Nizhoni Way Apparel and Glacsy-coming together as one fashion entity.

NuGen was looking to the future and thinking of the road that needed to be paved for future generations to enter into the arena of fashion and modeling without the stigma attached with being a minority. NuGen was also an answer to a problem that Nizhoni and Glacsy had in previous years which was: "How can we showcase our talents without dealing with shifty show promoters who only want to co-op Native talent to sell their names?" It was a problem shared by many Native talents.

Through hard work, discipline and positivism, anyone can prosper and that is what NuGen teaches its models, designers and photographers.

"With great talent brings great responsibility," remarks Ray Linder. "We would like to reach mainstream America with good honest talent and the only way to find that talent is to advertise, promote, and market."

Another newcomer to the scene was Dean Ricehill. At age 19, Dean presented his line called "Jadí Ensembles," a collection largely influenced by traditional Navajo ceremonial wear. With fabrics done in silks, linens and woolens, his collection transcended the "dated" look of ceremonial wear and gave it a fresh, but still wearable look. Influenced by his grandmother to sew and encouraged by his mom, Dean has been working on his designs for little over a year. When asked where he came up with the name, Dean replied, "'Jadí,' meaning "antelope" in Navajo [shows] where I am originally from-Antelope Trails, and 'ensembles' meaning to bring modern and traditional together."

When is comes to bringing traditional and modern together, one need look no further than Mildj Native Fashion and Design. Mildred Carpenter, from Lodge Grass, Montana, was the only non-Navajo designer; she is a member of the Cheyenne River Sioux tribe, Mildred brought the influences of her tribe to the collective. Her unique work done with the traditional Navajo staple fabric-the Pendleton blanket-presented in a rather unique way. She offered Pendleton sheath dresses, mini skirts, fitted tops and cropped jackets. Mildred said that most of her influence comes from the universe around her and her place in that universe.

She started out as an emcee at local fashion shows where she saw the work of other designers and began her own line in 2003 with the encouragement of her husband, Tommy Carpenter. Mildred wants her line to influence young people to, "Dream, Believe, and Pursue," whatever they aspire in life. Not being as young as the other designers were, Mildred believes that if she could get her collection started at her age, then there was no excuse for the younger people not to achieve the best for them. "Faith and perseverance is what will get you through all life's trials," she stated.

Based in Flagstaff, Grand Falls Creations (GFC) presented a collection of beautifully beaded handbags done in an assortment of fabrics and colors-everything from China silk tapestry bags to leather or buckskin medicine and drumstick bags. Each bag was beautifully and intricately beaded to perfection with Native American motifs in vibrant colors. One of GFC's trademarks is the Navajo "icon" of the Blue Bird Flour logo which was done up in embroidery and beads. The audience was pleasantly amused to see a familiar icon presented to them in such an eye-catching way. Trinidi Watchman and Tracey Watchman-Bob started their handbag line in 2004 with a flair for sewing and a "passion for purses."

GFC also allows customers to come in and design their own bags. The surprising turnouts for original handbag designs are men. They come in and pick from the wide range of fabrics, colors and beads. For whatever you need to carry in a bag, GFC has it. Everything is produced at their in-home studio and nothing is outsourced. Every handbag is sewn personally by the "dynamic duo." When asked how people respond to their purses, Tracey remarked, "People don't believe that we sew everything ourselves. They think that we buy already made purses and bead the designs on them. When we show them the subtle imperfections in the bags, they know it's an original."

A design student who graduated from the Phoenix College, Michelle Silver started her collection in 2004. Michelle started out as an embroidery artist with Demitri's Bridal. She perfected her skills and work with a variety of fabrics. Currently working a seamstress for Athena Window Fashions in Phoenix, Michelle was encouraged by her mentor and other seamstresses to begin her line by using the remnants found in the waste pile in the shop-Silk Moiré, Silk Taffetas, Rich Velvets, Linens, and plush cotton tapestries. Michelle presented a collection filled with amazing silhouettes and shapes.

Linder also provided the models for the event through Glacsy Models. Tionne's philosophy is, "Every woman is beautiful," which dispels the stereotype of the anorexic model and the unattainable body that could lead to distorted images of one's own body. Tionne would like to break away and have an agency that represents woman of all shapes, sizes and colors!

Finally, Nizhoni Way Apparel presented a collection that spans a variety of looks. Influenced by the rock-operas, "Tommy" and "Hedwick and the Angry Itch," Duane Clauschee designed a rather unique collection. Using the plain stiff and serious plaids we have all become accustomed to, Duane took and presented them in body conforming flirty dresses and skirts embellished with silver studs. Everyone's favorite schoolgirl uniform was transformed into a club-going outfit that model Tashina Redhouse rocked down the runway evoking the vibe of a Beyoncé video.

Nizhoni Way Apparel's collection ended with a wedding dress that people were in awe of. Duane commented to another designer, "Why are there no reactions?" The other designer said, "They are in shock! They are speechless! You've given something they were not expecting but love [so] enjoy it!"

It was a little over a year ago that two up and coming fashion designers got together to produce a show riding on the coattails of the Navajo Nation's Annual Music Festival. The event had a decent turnout and the coverage was modest. This year, however, NuGen Productions presented a show that represented every walk of life not just in Native America but from all across America. Looking to the future, all designers-Native or otherwise-hope that they will inspire the next generation to realize their dreams and work hard to make them come true. The hope of the generation before them is that they made it a little bit easier to get through the doors and that all walls and obstacles have been demolished for the next chapter in fashion and Native American history to begin.

To find out more about any of the aforementioned designers, go to www.nizhoniway.com.