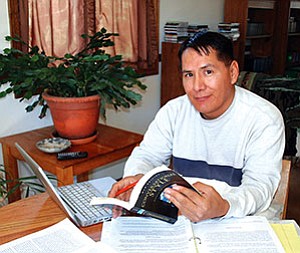 Joe, also the magazine's editor, received his master's degree in English at the May 11 NAU convocation ceremonies.

Each year graduating Native American students are honored at an awards ceremony. For master's or doctoral level students, the award is given to a student who has "demonstrated academic excellence in their area of study and/or who has performed outstanding service to the university and/or tribal community." Awards are also given to university faculty and support staff.

During his academic tenure at NAU, Joe published and edited REZ BIZ magazine while maintaining a 3.48 GPA in his studies.

"It has been an honor and privilege to have a student of your caliber at Northern Arizona University," wrote NAU President Dr. John Haeger in a May 23 letter to Joe.

"First, I congratulate you for doing an excellent job working towards a master's degree in English and being selected Outstanding Native American Graduate Student. By these accomplishments, you have demonstrated that you are a success and role model for other Native Americans," wrote Haeger.

Joe said that his family and friends knew how hard it was being a student and running a startup publication at the same time. "But I made it," he said. "I did something only few people have done."

He wrote a personal essay about his struggle in the June 6 edition of Indian Country TODAY, the largest national Native American newspaper in the country. His greatest struggle was running the magazine without capital and battling a disadvantage in the classroom.

"I also understand that while you were a full-time graduate student, you founded and published REZ BIZ magazine," Dr. Haeger wrote. "This is an impressive accomplishment. My staff and I have been very impressed with the publication."

"George is a first class student and scholar," wrote Larkin.

In his nomination letter, Henderson wrote, "Mr. Joe has practically built his business from the ground up using only his knowledge, personal resources, and lots of commitment and dedication. REZ BIZ is now widely read across the U.S. and many of the news articles have become required reading in classrooms and in college courses."

A member of the Navajo Nation, Joe hails from the community of Dilkon. Before enrolling in school full time in fall 2006, he served as senior public information officer for the Navajo Division of Health in Window Rock. There, he received awards from the Arizona Department of Health and the National Indian Health Board (NIHB) for his work. In 2005 he was one of six individuals from across Indian country to receive the prestigious National Impact of the Year award from NIHB.