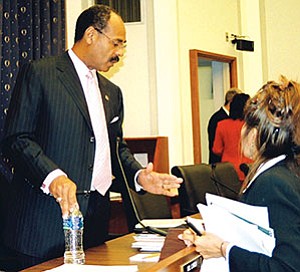 Aneva Yazzie (right) speaks with Congressman Emmanuel Cleaver II. She invited members of Congress to tour the Navajo FlexCrete Building Systems Inc. plant in Page and visit Navajo FlexCrete homes in Arizona, New Mexico and Utah. Congressman Cleaver encouraged the implementation of green building practices as all of Europe is progressing toward green building in construction (Photo by Rick Abasta).

WASHINGTON, D.C.-On June 5, the U.S. House of Representatives Committee on Financial Services held a hearing on the "Re-authorization of the Native American Housing Assistance and Self Determination Act" (NAHASDA).

NAHASDA was established in 1996, allowing tribes flexibility and room to establish housing services to benefit their tribes through execution of the Indian Housing Block Grant. The reauthorization of NAHASDA, 10 years after the law was enacted, has many tribes prepared to share remedies on problematic issues.

Two panels testified before the subcommittee. The first panel featured Orlando Cabrera, assistant secretary for Public and Indian Housing from the U.S. Department of Housing and Urban Development (HUD).

Cabrera said HUD was examining statutory requirements and supports reauthorization of NAHASDA to sustain the momentum in Indian housing. Specifically, he addressed encouraging amendments to allow more over-income valued service providers the chance to own homes on reservation lands.

Cabrera's testimony and proposed amendments to NAHASDA focused sharply on streamlining operations and reducing paperwork for grantees and HUD.

"The dramatic increase in the use of the Section 184 Program is a success story for tribes, tribally designated housing entities and especially for thousands of Native American families who are now homeowners as a direct result of this program," Cabrera said. "More and more opportunities are opening up to create a new housing economic development in Indian Country," he said.

Testifying at the hearing alongside tribal leaders from across the country for the second panel was Navajo Housing Authority (NHA) Chief Executive Officer, Aneva J. Yazzie.

Introducing herself in Navajo, Yazzie spoke of the success NHA had in improving housing conditions on the Navajo Nation, particularly in the past decade, through the utilization of NAHASDA.

She said NAHASDA is a good law, but not perfect. Loosening restraints for the utilization of NAHASDA dollars for infrastructure needs would assist all tribes, especially Navajo, she said.

"In Indian Country and on Navajo in particular, housing cannot be built without infrastructure," Yazzie said, pointing out existing water and wastewater systems are hopelessly overburdened.

"In Indian Country, the lack of infrastructure is an affordable housing problem," she said.

Beyond infrastructure concerns, Yazzie spoke of the intricacies of Title VI, which she said continued to frustrate tribes and policymakers alike.

Based on her experience working for the program before taking the helm of NHA, Yazzie said the inertia of Title VI is from two reasons: the lack of education on the program and the limited scope of allowable activities, often leading to tribal inability to generate funds to cover debt service, before the debt is assumed.

Title VI of NAHASDA is a successful Section 108 program, which allows tribes to borrow up to five times their annual allocations to support the functions otherwise allowed in the Community Development Block Grant program.

Yazzie said amending Title VI will have the positive effect of increasing investment in economic development and infrastructure where it is desperately needed without increasing federal appropriations.

Nosie shared the housing conditions of his people through a multi-generational story advocating for the San Carlos Apache tribe of New Mexico. He said, "First, let me take you back on a little journey here, and reflect back to 1962-64, when my mother traveled here to D.C. to speak to the House of Congress on the opportunity of having future homes on the reservation."

"In the 1920s, Indians were required to be on the reservation and this was forcibly done, causing many to move to what we now call the 'New San Carlos.' Then in 1962, the opportunity for housing came," he said.

Sharing an article from the Arizona Republic saved from the early 1960s, Nosie said the woman and boy in the photo accompanying the story was he and his mother. The article spoke of the convenience of housing taking away the hardships of the people, like no longer having to get water from the central compound.

"Before I came to Washington, I asked my mother, what should I say? She told me to ask you, 'What happened?'" Nosie said. "We are the first American people and this was the promise made to [us]."

"As you can see to my right, I have pictures here that show how people yet suffer still, with inadequate housing," he said.

The photos featured a 70-year-old house that at one time housed up to 12 children; a dilapidated mobile home housing the grandchildren of a deceased World War II veteran who passed away last summer and the substandard house for a middle-aged lady, who shared the house with five children and one grandchild.

"As (my mom) stated to you, there is still a lot of work that needs to be done in allowing the commitments we've made to be fulfilled," Nosie said. "Last, but not least, the war in Iraq. We know for a fact that it's taking a lot of our dollars and we ask that this be considered because we are the first Americans and we should always be considered the first people," he said.

Cheryl Parrish, vice chairwoman of NAIHC, said her organization was comprised of 264 voting members, representing 416 native tribes and Alaskan villages. It is the only national Indian organization that represents Native American housing interests, she said.

"Tribal communities across this great nation suffer daily, with inadequate and unsafe housing," Parrish said. "This impacts our education, our health, our spirituality and our pride in our community."

"We all want to lift our heads high, but this can be hard when you travel outside reservation boundaries and see how others live," she added.

Parrish said the nearly $6 billion investment made by Congress into NAHASDA over the past decade has made significant strides in providing homes for tribal families across the nation, but more still needs to be done.

She shared three items important to consider during the reauthorization process: regarding eligibility for federal supply sources; tribal preference in employment, and contract and operation maintenance costs.