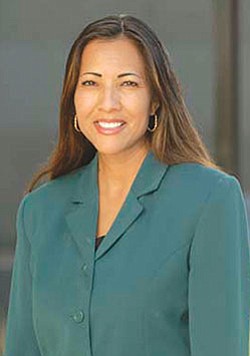 FLAGSTAFF-Mary Kim Titla hopes to become the first Native American woman in Congress. She has announced her candidacy and plans to unseat Rick Renzi from Arizona's Congressional District One.

Titla took her campaign race onto the winding woodland trail above Flagstaff's Thorpe Park that has served as the route for the Native Americans for Community Action (NACA) Sacred Mountain Prayer Run for several years now.

Titla competed in the 5k portion of the event on June 2.

Titla, who was born and raised at San Carlos, has been a respected journalist for many years. In 1987 she became the first Native American television reporter in Arizona at KVOA-TV in Tucson, where she worked for six years. In 1993, she moved on to KPNX-TV, Channel 12, in Phoenix. Titla resigned from her position in 2005 in order to publish her own e-magazine, Native Youth Magazine.

It isn't unusual at all to find her at a race.

"I've been running most of my adult life," Titla said. "I enjoy it."

In considering the Sacred Mountain Prayer Run, Titla understands the concern for the protection of the Peaks, and the sovereignty issues inherent in the battle.

"What is significant about the case is that the 9th District Court of Appeals recognized that the mountain is a living, breathing entity to Native Americans. As a Native American, I understand and respect that."

Titla is aware that the U.S. Department of Justice has filed for a rehearing and appeal en banc on behalf of the Forest Service in this case, which could have the case heard before the entire 9th Circuit.

"I hope the court will let the ruling stand. The decision will be significant for a lot of cases being brought forward."

"What happened is that a month and a half ago I was in Brazil for a week, and the news broke about the federal investigation [of Renzi] at a Washington political Web site," Titla said. She was also approached by people who told her that her name had been thrown into the hat.

"Leaders, both Native and non-Native asked me if I would consider running against Renzi," Titla continued. "First, I discussed it with my family. I talked to elders. It boiled down to what one elder said to me. He said that these kind of things don't just happen to people. These things happen to you for a reason. [He told me,] "'You need to take this seriously, take your prayers to the Creator and make sure this is what He wants for you.'"

"After taking a look at the pot of candidates who surfaced at the time, I didn't think I would vote for any of them," Titla said. "I feel I can do a better job. I've always been concerned about the welfare of my community."

In many cases where Native Americans have run for significant seats in government, non-Indians have asked how they will be able to fairly represent their interests. When asked how she would answer this concern, Titla was quick to answer.

"I hope this won't be an issue of race. I hope people won't vote on race," Titla said. "I happen to be Native American but that doesn't change how deeply I care about this community. When I say that, I don't mean the Native American community only."

In fact, like many people in District One, Titla's family is representative of the cultural diversity of the region through intermarriage.

"Naturally the welfare of all peoples must be considered, and whoever represents this district must be concerned about all who live here, because this is the community," Titla emphasized.

"I've been embraced by the public as a reporter by all nationalities, and I left Channel 12 in good standing. I'm very proud to be seen as a fair, sound journalist. People trusted me and they expect that of me in my campaign. I will bring those qualities to office."

Titla's life experiences give her a broad ability to understand the concerns of many different groupings of people. She has known poverty at an extreme level-she grew up without running water and electricity and on commodity foods. She began her own family as a young person, and though she wasn't on welfare, she did take advantage of the Women, Infants and Children (WIC) program.

"I am a parent. I've experienced the ups and downs of raising [children]. I'm aware of the issues our young people are experiencing. I have a two-year-old granddaughter and my parents are raising my nephew. I understand the issues of grandparents raising children and grandparent rights."

Titla's platform includes a strong focus on children. "I've been an advocate for youth for more than 20 years, and I continue to do that. When children are struggling or suffering, I am concerned," she said.

There are many areas we can improve to make the lives of children better," Titla continued. "There is a need to improve health care, education, and the environment.

"I don't know how many of the candidates will bring this experience to the race. I can relate to people on many levels, and my experience as a journalist is a plus," Titla said. "I met with people in Arizona face to face. I was there in good times and in tragedy. I covered the issues that are important to the people in Congressional District One, and I covered the political races. I learned the issues. I did research. And I will continue to do research as a candidate."

Former Miss Navajo Nation Radmilla Cody ran the 10k race, and has been a strong advocate for issues important to the Western Agency, including the Peaks issue. She has known Titla for about nine years, and fully supports her friend in her latest endeavor.

"I am excited for her. She's not only a beautiful person inside and out, but she's genuine about what she puts her heart and mind to," Cody said. "If elected to Congressional District One, I truly believe she will do what's best for people as a whole, and she's a new face and new energy for the position. That's what we're looking for."