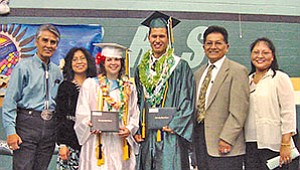 Navajo Nation President Joe Shirley Jr. (left) along with his wife Vikki shared the stage with 2007 Tuba CIty High School (TCHS) valedictorian Jessica Goatcher and salutatorian Christopher Holve along with Hopi Tribal Chairman Ben Nuvamsa and his wife Lynn at the TCHS graduation on May 26 (Photo by Byron Poocha/TCUSD).

TUBA CITY-The recent soggy rains prevented the final graduation ceremony from being held on the Blue Canyon Memorial football field, but that did not stop the capacity crowd of nearly 5,000 people from filling the Warrior Pavilion on May 26.

Both bottom and top seating sections were crowded, and the floor was covered with proud parents and grandparents snapping photos of their own special graduate.

The dignitary lineup was impressive as well. Both Hopi Tribal Chairman Ben Nuvamsa and his wife, Lynn Dalton-Nuvamsa attended along with Navajo Nation President Joe Shirley Jr. and his wife, Vikki Shirley.

After the live performance and processional, a traditional prayer in Navajo was given by senior Jordan Begay to open the ceremony.

The welcoming address was given in five languages to reflect the broad cultural and language diversity at Tuba City High-the English version was given by Eve Hosteen, Allen Joe Jr. gave the Navajo version, Sehoy Talaswaima gave the Hopi version, LaChrisa Maloney gave the Spanish version, and Christopher Holve gave the Chinese version.

Valedictorian Jessica Goatcher and salutatorian Christopher Holve were given a resounding round of applause by the capacity crowd and by their 187 fellow classmates.

President Shirley and Chairman Nuvamsa were warmly greeted by parents and guests at the Pavilion and were able to stay to pose for family photos with seniors and parents in the final phases of the ceremony.

Diplomas were given to the graduates by Dr. Thomas, Kieffer and TCUSD governing board president Alvin Harvey and his board members-Linda Honahni, Mary Worker, Marsha Griffin and Jack Begay.

The benediction was given by class president Lakota Scott with the entire senior class acknowledging the late Dr. Hector Tahu, the former TCUSD superintendent who passed away suddenly earlier this spring.

Another special acknowledgement went to the San Manuel Band of Mission Indians of California for donating $32,000 to the senior class for their recent trip to Hawaii. Jacob Coin, a TCHS alumnus, was on hand to accept a formal thank you gift from the Seniors of 2007.