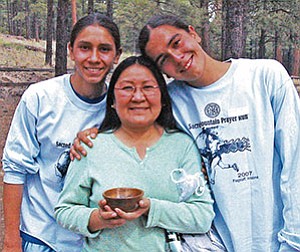 Isabelle Walker and her sons, Tenzing and Sakya Calsoyas, celebrate the boys’ victory in the 24th Annual NACA Sacred Mountain Prayer Run. Walker is a Deputy Chief of Staff to Navajo Nation President Joe Shirley Jr., and is Vice President of the Birdsprings Chapter (Photo by S.J. Wilson/Observer).

FLAGSTAFF-The 24th Annual Native Americans for Community Action (NACA) Sacred Mountain Prayer Run held June 2 was especially poignant. It fell not long after the Ninth Circuit Court of Appeals ruling against snowmaking and the subsequent appeal filed by the U.S. Department of Justice on behalf of the National Forest Service.

The run is popular among both Native and non-Native runners-and the sense of the sacred is not lost on the former. Each year the run begins with a prayer and blessing and runners are signaled to begin by a single, clear note from an eagle bone whistle. Sam Tso was chosen for the honor of blessing the runners and blowing the note this year.

Tso is no stranger to sacred site issues. He grew up on Black Mesa and was one of the infamous "Fence Buster Four," a group of young Navajos who supported the wishes of their elders by cutting the fence that separated Navajo and Hopi Partition Lands. He fought that battle from the time he was a teenager, was forced to relocate, yet still fought for the N-aquifer and now the battle against artificial snow that scientists say contain carcinogens and other contaminants.

"The heart of coal company," Tso describes his home. "Home of the purest coal in the world. Everyone wants it, but Talking God says, 'No, you can't have it.' Are we ready for the destruction that comes when Flint Boy becomes angry? Remember Meteor Crater."

Tso recognizes the alignment of the prayer run with the Peaks issue.

"It reminds me of our tradition of running three times a day-at dawn, at noon, and in the evening as the sun is setting," Tso said. "Dawn represents the breath of life, noon represents daily life, and the evening represents one's thoughts and the nervous system."

Tso also spoke of the meaning of Dook'o'osliid in Navajo philosophy-the breath of life, of good thoughts.

"With the continued contamination of Dook'o'osliid with foreign materials, it is no surprise that there is an increase in brain tumors, strokes and heart attacks. It seems no one respects the sacred anymore," Tso said. "Very few stick to the traditional ways. It seems people are too busy with other things to give prayer and make offerings. What will happen to humanity if we leave all of this behind?"

Tso's thoughts are mirrored by those of Isabelle Walker, who works in Window Rock under President Joe Shirley and also serves as vice president of Birdsprings Chapter. She and her sons, Sakya and Tenzing Calsoyas, wanted to spend the morning among community members. As her boys ran the 10k race, Walker shared some of her thoughts.

"I like to participate in anything with a prayer in mind," Walker said. "Running with the same mind frame among a group of people making prayer is a powerful thing. Being part of that mindframe for whatever goals people set out for themselves-I like being a part of that."

This has not been the first time Walker and her family has attended the race-but in light of the recent legal developments, she has focused on a specific thought.

"This time I think of the mountain, Dook'o'osliid, the home of the Sacred Abalone Shell Woman, and the owners of the Arizona Snowbowl," Walker said. "As for continuing with the legal battle-anything to keep the Sacred Mountain in peace. Let it continue to be our Native American shrine, a place of prayer and a place of strength. Whatever it takes, we should continue to do whatever it takes to let it remain at peace."

Ralph Pepino, a non-Native, was only one of many overheard commenting on the beauty of the race route. Pepino stopped by the awards table to thank Jamescita Peshlakai, one of the staff members at NACA.

"Thanks for putting this on," Pepino said. "How do you beat running in the woods in Flagstaff in the summer?"

Pepino, a resident of Flagstaff since 1978, has been making the Prayer Run for the past ten years.

"The trail is so pleasant, and the religious aspect of the race gives it extra meaning," Pepino said.

When asked if he supported the various tribes that are fighting to protect Dook'o'osliid from further development and artificial snowmaking, Pepino said that he did.

"A lot of modern Americans have no respect for nature, and are basically driven by greed," Pepino said. "Yes, I support the efforts to stop snowmaking on the Peaks."

Understanding that this year the race had strong political undertones, Dana Russell, CEO of NACA, maintained a placid front. "Each year the race is different, and this year is no exception," Russell said. "But we strive to improve the experience, and we plan to continue the tradition."