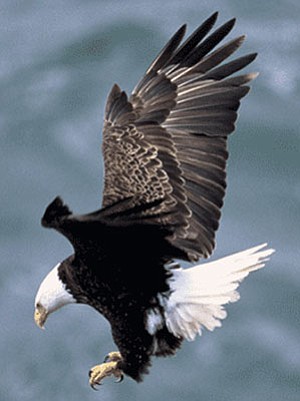 KYKOTSMOVI-The Hopi Tribe has joined other tribes throughout the state and the nation opposing the proposed delisting of the bald eagle from the endangered and threatened species list.

Since many eagles are found on reservations, the tribes are also upset that they have not been consulted during the process and remain out of the loop on how bald eagles should be managed.

A federal court has ruled that a decision about whether to delist should be made by June 30. The bald eagle was listed as endangered in 1978, but was then downgraded to threatened in 1995. The proposal to delist it as threatened began in 1999.

The Arizona Commission on Indian Affairs has drafted a resolution to support the tribes in their opposition to the federal government's proposed delisting of the bald eagle. The National Congress of American Indians has also expressed its opposition to the delisting.

Lee Kuwanwisiwma, director of the Hopi Cultural Preservation Office, said the numbers show that bald eagles are not recovering in Arizona like they are in other states. He said there are 7,600 breeding eagles nationally, but only 42 breeding pairs in Arizona.

"It's clear that the breeding eagles future in Arizona is uncertain," he said.

Kuwanwisima said there are only three habitats for bald eagles in Arizona: Verde River, Salt River Canyon and Mormon Lake. He noted that of the 42 breeding pairs in Arizona that 20 of them are on reservations.

"The tribes have not been included in the consultation or management that has already been agreed to by the federal and state government," he said.

Management of bald eagles is currently carried out by U.S. Game and Fish, but if the eagle is delisted, the states will take over monitoring of the eagles.

Kuwanwisiwma said if the state takes over the management, he does not know if they will include the tribes in the management of the eagle.

Kuwanwisiwma said the U.S. Fish and Wildlife has a "terrible record of government to government relationships."

He added the Arizona tribes are asking the federal government to exempt Arizona from the delisting if it goes through at the federal level.

The U.S. Fish and Wildlife held a meeting in Phoenix with the Arizona tribes on May 9 to inform them that the federal government was leaning toward delisting and discussed tribal concerns.

Benjamin Tuggle, regional director for U.S. Fish and Wildlife, told the tribal representatives that the decision to delist would come out of Washington D.C. and would be based on science and the national recovery effort.

Hopi Vice Chairman Todd Honyaoma Sr. attended some of the meetings, but since Ben Nuvamsa recently became chairman, Kunwanwisiwma said the new chairman has yet to catch up.

The San Carlos Apache Tribe has been among those opposing the delisting in Arizona because their reservation abuts the Salt River where many bald eagles are nesting.

"The Hopi revere the bald eagle," he said.

Kuwanwisiwma recalled that bald eagles used to nest as close as Leupp along the Colorado River until the 1940s. After the damning of the Little Colorado River, he said the habitat for the bald eagle was lost.

Kuwanwisiwma said the bald eagle has significance in the Hopi religion and are allowed by the courts to use eagle feathers in their ceremonies. He said Hopis have social dances about bald eagles and many Hopi artists depict bald eagles.

A meeting was held May 1 in Kykotsmovi to discuss the delisting with the Hopi Tribe.