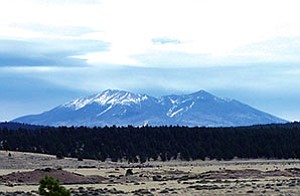 Northeastern view of the sacred San Francisco Peaks approximately halfway between Flagstaff and Williams. The sacred mountain is once again under threat due to the U.S. Department of Justice’s appealing the ruling to prohibit artificial snowmaking using reclaimed wastewater on behalf of the Forest Service. The initial ruliing of the case by the 9th Circuit Court of Appeals thwarted attempts of proposed expansions and artifiicial snowmaking by the Arizona Snowbowl, a local ski resort (Photo by Wells Mahkee Jr./Observer).

FLAGSTAFF-On Wednesday, May 30 the U.S. Department of Justice on behalf of the Forest Service filed for a rehearing and appeal "en banc" (by the full court) in the case to protect the sacred San Francisco Peaks in northern Arizona.

The 9th Circuit Court of Appeals previously ruled in favor of Native American tribes and environmental groups on the grounds that a proposed ski area development and expansion would violate the Religious Freedom Restoration Act (RFRA) and the National Environmental Policy Act (NEPA).

The Peaks, which are held holy by more than 13 Native American tribes, have been at the center of a legal battle that has pitted these tribes and environmental groups against the U.S. Forest Service and a small private ski area. The Arizona Snowbowl ski area has been attempting an expansion and proposed snowmaking with treated sewage effluent on the sacred mountain. The Forest Service, which leases the land to Snowbowl, initially approved the decision, but was then faced with lawsuits by the Navajo Nation, Hopi Tribe, Hualapai Tribe, the White Mountain Apache Tribe, the Yavapai-Apache Tribe, the Havasupai Tribe, the Sierra Club, the Center for Biological Diversity and the Flagstaff Activist Network.

"The decision of the Forest Service and Snowbowl to appeal the ruling is shameful and harmful to all of the tribes and people of this country who value religious freedom and a healthy environment," said Howard Shanker of the Shanker Law Firm, PLC. "The 9th Circuit [Court] ruling did not grant Native Americans new rights that restrict other uses of public lands, it only upheld and protected the rights they already have."

Carly Long, president of the Flagstaff Activist Network added, "The Federal Government does not have a compelling interest to [support] a private business. As a taxpayer, I am outraged. The Forest Service has spent a lot of our money in this case and they are disregarding good case law. All public land users should be outraged."

A rehearing could bring the case back before the 9th Circuit Court of Appeals. An appeal "en banc" could have the case heard before the entire 9th Circuit. However, there is no guarantee that the courts will hear this case.

In the 9th Circuit Court briefing, Vincent Randall, a Yavapai-Apache Councilman said, "[P]eople wonder why we are upset because [they say] we can still use part of the mountain... We do not see the mountain as a pie to divide up into segments. The mountain is a whole entity, [much] like a pregnant woman or a large mature tree."

Jeneda Benally, a volunteer with the Save the Peaks Coalition added, "We always knew that this would be a long and difficult struggle. The fight for human rights and religious freedom has always been a challenge in this country. The Save the Peaks Coalition is committed to creating healthy relationships between people in our community and lasting environmental justice for future generations."

With that in mind, the Save the Peaks Coalition initiated a "Healthy Communities/Turquoise Ribbon Campaign" to engage local citizens and the Flagstaff business community in the call for respect for the environment, community health and cultural diversity. A demonstration was held on Monday, June 4, at the Coconino National Forest Service office in Flagstaff.

The message is clear. "We must at some point stop trying to fake the world and realize that our actions as humans have created a world in peril. The Native cultural perspective that is protected by this court decision is in fact a road map to once again creating a world in balance," said Rudy Preston of the Flagstaff Activist Network.