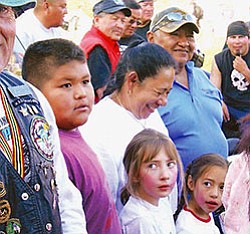 TUBA CITY-She was one of our own.

Perhaps most inspiring, she was a dutiful soldier who gave her young life to protect our freedom in the ongoing war in Iraq and Afghanastan.

She was Lori Ann Piestewa.

It has been three years now since her death, and she is one of many Native Americans from this area who have given their lives for this country.

She is also one of many who are now annually honored by Larry Noble, a Navajo Nation Council Delegate from Steamboat and a Native American contingent of motorcycle riders who travel from Flagstaff, Tuba City and Window Rock, as well as Utah and New Mexico to honor the lives of these brave Native soldiers.

Several members of Tuba City Unified School District who have ties to Piestewa through her family or workplace, support and ride with hundreds of American Indian riders who partake in this three-day trek across the Western and Eastern Navajo Reservation, with a specially designated stop in Kykotsmovi at the Hopi Veterans' Memorial Center on the Hopi Reservation.

Reggie Curry, Nolan Dempsey and Byron Poocha all work for TCUSD, but take their humble riding places in the larger traveling group that represents Tuba City and the Hopi Reservation in this Native American Honor Run.

Along with them are other riders from the Tuba City community: Linda Addington, Kenneth Goldtooth, Eunice Poocha and Leonard Williams.

What started as just a small group of three American Indian riders in 2001 has now grown to over 400 riders this year.

Curry, Dempsey and Poocha proudly represent the Tuba City District in honoring Piestewa and the other brave soldiers who have come from Arizona, New Mexico and Utah.

One of the newest stops for this Native Honor Run is near Flagstaff at the new Extreme Makeover home of Lori's parents, Terry and Priscilla Piestewa. The Piestewas hosted a lunch for the riders at their new home which was built two years ago.

Along with Lori's two surviving children, Brandon and Carla Whiterock, the Piestewas were on hand with many members of their Tuba City-Moencopi family to greet and visit with the riders as they went on to Window Rock.

For more information about the Native Honor Run contact Larry Noble at n_larry@hotmail.com or call (928) 380-2201.