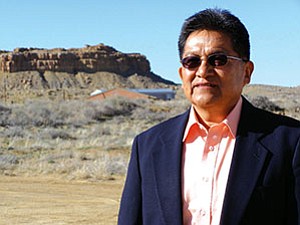 Hopi Chairman Ben Nuvamsa was granted an extension of his chairmanship at a hearing held May 30 at the Hopi Tribal Courts. He and his staff will be allowed to remain in office until the next scheduled trial date set for June 22 (Photo Courtesy of Ben Nuvamsa).

KEAMS CANYON-Although Hopi Tribal Chairman Nuvamsa was unable to attend hearings held May 29 and 30 to determine his fate as well as that of his staff and the Hopi people, the Hopi Tribal Court extended Nuvamsa's stay in office through June 22.

Due to his spiritual and ceremonial preparations for the Kachina dances to be held the first week of June, Nuvamsa refrained from attending the proceedings.

"It's necessary spiritually to be clean," Nuvamsa said.

Nuvamsa's head attorney George Hess, as well as Nuvamsa's chief of staff Bonnie Secakuku, clarified the facts that the case was filed with the court on the grounds that the Council did not have the authority to nullify the General Election of Ben Nuvamsa or remove him from office according to Hopi Tribal Law.

"We are in a room of the law now," Secakaku said. "The underlying issue is whether or not the Hopi Tribal Council had the authority to nullify the election."Hess explained that the focus is on these two issues alone.

At the May 30 hearing, the defendants' attorney Erin Burns indicated the intention of her clients to file supplementary motions, and thus the trial was postponed until June 22. As a result, Nuvamsa and staff will be allowed to remain in their elected offices through that date.

Judge Jeff Tager, Pro Tem judge from Tesuque, N.M. will preside at the June 22 hearing. Tager is being brought in to hear the case based upon his distance, independence and separation from the issue.

"Now we're busy doing what we need to do," Secakaku said. "Our priorities continue to be to inform, educate and update our people. Chairman [Nuvamsa] is performing excellent under the conditions. He is very calm. He sticks to the issues. ... He strives for cohesion every day. What keeps him going is the people that support him-the Hopi people," Secakaku said.

Also in support of Chairman Nuvamsa, his case and administration is attorney Howard Shanker, who represented the 13 Native nations in the case against the use of reclaimed wastewater on the sacred San Francisco Peaks.

"Howard Shanker and Laura Berglund appeared on this case on Wednesday," Hess said.

According to Shanker, after studying the Hopi Constitution and Tribal Law, the Council did not have the legal right to nullify the election or remove Nuvamsa from office.

Furthermore, and outside the realm of this case, Shanker said that according to Hopi Tribal Law, the Council violated the rights of the Hopi people, which could leave each individual subject to fines and possible jail time.

Despite the ups and downs in the past months, Nuvamsa said his primary thoughts are on serving the Hopi people and government.

"There are bigger issues here-national issues, grants that are due, the financial condition of the tribe. That's something that's been on my mind-whether or not the Tribe is fiscally stable and at the end of the year whether we're going to be in the black rather than in [a] deficit," Nuvamsa said.

Nuvamsa explained his focus on applying for and resubmitting grants; finding ways to leverage funds to support the Hopi people; establish and develop a task force to thwart the use of methamphetamines in Hopi villages; and finding ways to establish an elderly home on Hopi lands.

"These issues are urgent. We have to make sure that we don't unnecessarily delay programs and services to the Hopi people," Nuvamsa said.

Both the Hopi Vice Chairman's Office and Tribal Secretary's Office declined comment on any issues surrounding this case. On May 29, Hopi Tribal Secretary Mary Felter was arrested for violating the temporary restraining order (issued May 17 by the Hopi Appellate Court) by issuing a memorandum to all Tribal programs on March 24 that "the Tribal Council, by majority vote, restated and reaffirmed that the 2007 Special Election was rendered null and void...implementing the removal of Ben Nuvamsa from the offices of the Hopi Tribe."

Further, Felter's memo instructed recipients to "act on the last word of its governing body - the Tribal Council."Felter was released on her own recognizance shortly following her arrest.

For past articles and additional information, please visit our Web site atwww.navajohopiobserver.com.