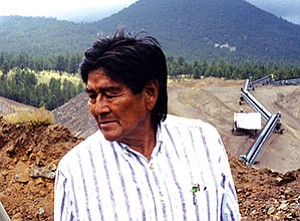 Former Hopi Tribal Chairman Ferrell Secakuku was among the activists who fought to close the White Vulcan pumice mine that left a permanent scar on the Sacred Peaks. Here, Secakuku turns in disgust from the open mine (Photo courtesy of S.J. Wilson/Observer).

SHIPAULOVI-Ferrell Secakuku has been described as a peaceful man who loved the Hopi way of life. Part of his philosophy was living in harmony with the world around him, to protect the environment and sacred sites and to grow food. Therefore, it was no surprise to many that upon learning he had terminal cancer, Secakuku rejected the chemotherapy that might have lengthened his life.

Secakuku passed away on July 25 at the age of 69, and was laid to rest in his beloved Shipaulovi. He is survived by six daughters, his wife Anita Poleahla, and numerous grandchildren and great grandchildren.

Secakuku's life was celebrated July 16 (prior to his death) at the Hopi Veterans Center.

There, longtime friend Vernon Masayesva listed Secakuku's most important contributions during his term as Hopi Tribal Chairman from 1994-1997, helping bring closure to the so-called Navajo Hopi Land Dispute to the establishment of the Hopi Health Care Center.

"Chairman Secakuku has done much for the Hopi Tribe and has some major accomplishments," Masayesva said. "I received a call from Milton Bluehouse who was the President of the Navajo Nation when Ferrell was in office. He told me that they were once classmates, both played football and basketball, and that Ferrell was the best player they had. Mr. Bluehouse wishes everyone well, and said that he has good memories about our friend."

Liz Grobsmith, provost for Northern Arizona University (NAU), spoke of another side of Secakuku.

"I am pleased to be here today, even though this is a sad circumstance," Grobsmith said. "I met Ferrell five years ago at Northern Arizona University. One of my first experiences with him was coming up here to Hopi. I saw the work he was doing with [NAU] faculty and students in bringing back the old way of farming. He also worked to preserve and record Hopi songs and culture."

Grobsmith spoke of Secakuku's desire to earn a master's degree, a desire he ultimately fulfilled in 2006.

"It was such a thrill to hand Ferrell his master's, and I believe he is the oldest person to earn a master's from our university," Grobsmith continued. "He believed that by studying anthropology, he would come to a better understanding about his clan and his people. He has distinguished himself in the academic world, and serves as a mentor for other Hopi people who might want to step in and earn a degree."

Grobsmith said that Secakuku believed in giving back, and that his contributions to his people would be remembered for generations to come.

Miguel Vasquez, a professor of anthropology at NAU, said although Secakuku considered him a teacher and mentor, he considered Secakuku his own teacher.

"I've been told that to be a Hopi man, one must be humble, hardworking, and have a sense of humor. Ferrell is those things," Vasquez said.

When Secakuku announced his decision to seek his master's degree in anthropology, he explained his reasoning to Vasquez with his characteristic humor.

"Anthropologists have been writing about us for centuries. Some of it is good, most of it is not. I think it's time we Hopi put our two cents in," Vasquez remembered Secakuku saying.

"He was the wisest, kindest, gentlest, most humble person I've ever known," Vasquez said.

Anita Poleahla, Secakuku's wife, spoke of the couple's work to preserve the Hopi language through song. She was accompanied by friends who each shared his or her thoughts on the project.

Bucky Preston and Andy Bessler of the Sierra Club each talked about Secakuku's work to protect the environment.

"I look to Ferrell as a role model to be a better Hopi," Bessler said. "I learned from Ferrell to see the natural elements as a part of my life. This world is losing a bridge-builder between cultures."

Bessler presented the Secakuku family with a certificate of appreciation from the Sierra Club.

Preston shared his memories of Secakuku as a runner.

"I am close to Ferrell," Preston said. "I looked up to Ferrell as a companion on my runs. I had Ferrell do the spiritual things that had to be done outside the eyes of the media."

As a runner, Secakuku shared the understanding that when running, one must never think about the miles involved, that one had to think about the reason why they are running.

"You cannot run with anger in your heart because that will make you tired. Ferrell made it clear why I was doing these runs.

"I've never seen Ferrell angry, even though I've seen a lot of things thrown at him," Preston added. "He's done a lot, he's been here, done that, he was always singing and talking about the Hopi ways so they would not die away. Ferrell knew as a Hopi man the reason why we were running. We were doing it for the people and the things that cannot.

"A lot of people don't understand the concept of running for issues," Preston said. "We sacrifice ourselves."

Leonard Taliswaima had earlier mentioned that he had seen Preston running to the event early that morning, and Preston addressed his decision to arrive on foot.

"I ran from Walpi," Preston said. "I knew that this is what Ferrell would have wanted. He was with me all the way, and it was easy. I had his face before me, and I could picture his face and the way he looked when he was smiling."

Hopi Chairman Ben Nuvamsa was on hand to read letters from others who could not be in Kykotsmovi, including a message from U.S. presidential candidate John McCain. Nuvamsa said that he believed it was important that people were able to say the things they had to say while Secakuku was alive.

Nuvamsa issued a proclamation from the Hopi Tribe that detailed Secakuku's many accomplishments and his important work for the Hopi people, proclaiming July 16 as Ferrell Secakuku Day on the Hopi Nation.

Nuvamsa also read a statement by Secakuku, where the former chairman said that it had been a pleasure to be in service to the Hopi people and his love of the Hopi ways-a way he wanted to see the Hopi people to continue.

Secakuku described his work in life as hard, but rewarding, and asked that the Hopi Council put aside their differences, asking that it put the needs of the people first.

Secakuku thanked the many people who have called and visited, and who attended the celebration.

"Thank you for the love and time you have shared with me," Secakuku wrote.

He concluded by telling the many people who love and respect him that he would use the Hopi teachings to get him through his illness.

The tribute to Ferrell Secakuku came to a close as Taliswaima and his sons led the singing of one of Secakuku's songs, describing children playing in the rain. Noted Navajo artist presented the Secakuku family with a portrait he had done of the humble farmer, former chairman and warrior. The event closed with a prayer offered by Cedrick Kuwaninvaya. The event ended with a shared meal-as people ate, others shared personal messages to Secakuku on video camera.

All who spoke of Secakuku agreed that it is an honor to know him, and were grateful that they were able to give this gentle, peaceful man that message. There were tears, but there was also laughter, and a lifetime of memories shared among the family and friends of Ferrell Secakuku. Those tears continue with the passing of this humble man-but the memories and laughter continue also as thunder and rain celebrate Secakuku's passing.