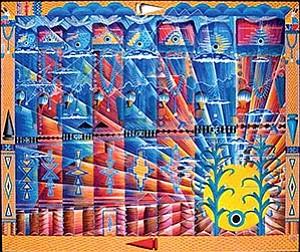 FLAGSTAFF-The 58th Annual Navajo Festival of Arts and Culture at the Museum of Northern Arizona (MNA) presents an established Navajo filmmaker, a professor of philosophy, and an author to expand the current understanding of Navajo arts, cosmology and history and create new understandings about this great people. The festival will be held from 9 a.m. to 5 p.m., Aug. 4 and 5.

MNA's director Robert Breunig stated, "Navajos and non-Navajos come together during the festival to share perspectives, cultural customs and original artwork. To that mix, the museum brings experts with new insights about our neighbors, the Diné. There is so much to learn about the Navajo Nation, which has the largest reservation in the U.S. and a population that has surpassed 250,000."

"Innovation meets tradition at this year's Navajo festival," Anne Doyle, MNA's Heritage Program coordinator said. "Seventy-five artists will join performers and Heritage Insight speakers-all serving as cultural interpreters of today's Navajo world, both the traditional and the contemporary. We highlight language and film this year as tools of communication to illuminate and celebrate the Navajo experience."

Navajo director and filmmaker Bennie Klain is not afraid to tackle a difficult subject; his documentaries and fictional films challenge cultural assumptions and focus on the struggle of Indigenous artists to maintain their cultural identity. His newest film, Weaving Worlds, explores personal stories of Navajo weavers and their complex relationship with reservation traders. In the film, the weavers maintain a delicate balance between cultural survival, economic independence and motivation. Klain will show his film and offer discssion at 10:45 a.m., Saturday, and noon, Sunday.

Klain's films may not provide clear-cut answers, but rather provoke the viewers into examining some of the cultural challenges in America today. A fluent Navajo speaker, he meshes mainstream and Native storytelling techniques and incorporates his language into his work as much as possible; eighty percent of the dialog in Weaving Worlds is in Navajo.

Klain co-produced and worked as a translator for The Return of Navajo Boy, which screened at more than 60 festivals and has received many honors. Klain recently graduated from the University of Texas at Austin and his production company, TricksterFilms, is based there. His short film Yada Yada won the Teueikan Second Prize at Montreal's First Peoples' Festival in 2003. Weaving Worlds was recently a featured film at the acclaimed South by Southwest Film Festival in Austin, Texas where he now lives. He is originally from Tuba City.

A professor of philosophy and history at Fresno Pacific University, Richard Wiebe is also a research associate at MNA and studies Navajo philosophy. His presentation and accompanying visuals titled Navajo Conceptual Metaphors and Pattern Languages at 9:30 a.m. both days is a new investigation of the power of language. Wiebe traces the significance of repeated metaphorical descriptions of the world in the Navajo language and explores the character of this culture's cosmology and ceremonies to better understand Navajo lifeways.

Linguist Larry King from Farmington, N.M. is a bright light not to be missed. His humorous reflections of the Diné culture in Navajo and English walk the audience along a path of history and legend, highlighting the resilience of the Navajo language in the twenty-first century. King talks on Saturday at 2:15 p.m. and at 2 p.m. on Sunday.

Carolyn Niethammer will give a talk about "America's Native Women: The Ordinary and the Extraordinary," followed by a book signing of her book from Salina Bookshelf, Keeping the Rope Straight. In her most recent book, Niethammer focuses on Annie Dodge Wauneka, the daughter of the great Navajo leader Chee Dodge. On his deathbed, he counseled his children to look after the Navajo people. Wauneka served on the Navajo Tribal Council for 26 years and played an important role in bringing white doctors and tribal medicine healers together to control tuberculosis on the reservation. She was outspoken, energetic, creative, feared, and loved.

Returning to Navajo Festival this year

Flagstaff's Diné rock trio Blackfire will showcase songs from their CD Silence is a Weapon. This new release leaves no doubt about the anger and hopelessness many Native people face, but there is also hope in their music, as it demands personal respect, environmental and cultural justice, and a healthy, sustainable world in which to live. Blackfire has toured the world, sharing their music and traditional culture. They add to their rock format mesmerizing stories and dance about traditional Diné ways by their medicine man father Jones Benally.

Native American Music Awards winner and Grammy-nominee Aaron White returns with flute sounds from his Navajo and Ute roots, blended with rock guitar and singing from his early years in urban California. He's played everywhere from a presidential inaugural ball to a benefit concert at Arizona's San Francisco Peaks, on one day recording a film soundtrack of his compositions, on another awakening young minds as an artist-in-residence. White's played with a long list of internationally famous musicians and is a favorite in this region.

Clarence Clearwater's big, enchanting voice and stirring acoustic guitar are most often heard on the Grand Canyon Railway as he entertains passengers traveling between Williams and the canyon. He sings traditional songs in Navajo and contemporary songs in English, about his spirituality and the oppression of Native people.

Canyon Records recording artist and Native American Music Awards winner Radmilla Cody will be the emcee for the Heritage Insights tent and will perform on Sunday at 3 p.m. from her latest release Precious Friends, an album of children's songs. They include classics with Navajo lyrics and original compositions for children by noted educator and songwriter Herman Cody.

The Pollen Trail Dancers, a traditional children's dance troupe from Joseph City that performs colorful social dances, will present an educational fashion show of Navajo clothing through time, traditional to modern wear. They will also perform dances depicting the Long Walk and the history of the Blessing Way.

Visitors will be able to hike with ethnobotanist Theresa Boone Schuler, a Diné educator from Flagstaff and a popular presenter at past festivals. They will learn Native uses of local plant life on the Museum's Rio de Flag Nature Trail three times each day at 10 a.m., 12 noon, and 2 p.m.

Some of today's most important artists will be showing their work at the festival. Flagstaff painter Shonto Begay is a visual storyteller whose fertile creativity births paintings of wonder, sadness, and truth about being Navajo and living on the reservation. Basket maker Sally Black from Monument Valley is one of the few remaining artists whose vision, fine workmanship, and tightly woven designs are keeping this art form alive. And innovative weaver Morris Muskett, one of the few males who weave in the Navajo tradition, is best known for his exquisite sash belts with color and design innovations, but he also creates incredibly fine small rugs.

William Franklin was born in Ganado, near the heart of the Navajo Reservation. His maternal clan is Bitterwater and his paternal clan is Standing House. He remembers herding sheep off of the Plateau into the Painted Desert on horseback with his great-grandmother (who lived to be 107). He traveled the migrant trail and worked on farms and ranches, picking cotton in Safford, citrus and grapes in the Phoenix Valley, herding pigs and goats in Wickenburg, or any kind of work he could find. His grandmother, a weaver and silversmith, influenced him with her skills and planted the seeds for Franklin to become an artist.

Franklin attended Northern Arizona University, majoring in sociology and minoring in art, and entered his first Navajo Show in 1980 at MNA. He was awarded a first place blue ribbon for painting. He finally became a fulltime artist in 1984 and through trial and error, and persistent exploring, has established a style that springs from his imagination and his spirit. This year's festival poster is titled Morning Blessing Songs-Our Inheritance.

The 2007 Navajo Festival is sponsored by the Arizona Commission on the Arts, Coconino County Board of Supervisors, Flagstaff Cultural Partners/City of Flagstaff, National Endowment for the Arts, and Inn Suites Hotel.

The MNA is one of the great regional museums of our world, surrounded by tremendous cultural, biological, and geological resources in one of Earth's most spectacular landscapes. With a long and illustrious history, MNA evokes the very spirit of the Colorado Plateau, including the Grand Canyon and Four Corners regions, and inspiring a sense of love and responsibility for the beauty and diversity of the area. By presenting Native cultures, fine arts, and tribal lifeways at its festivals, MNA serves as a gateway to understanding the Colorado Plateau.