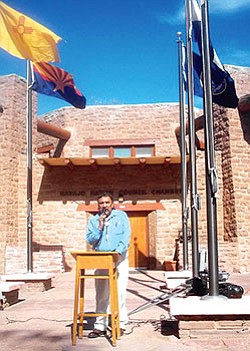 "We have a full agenda this summer session, and I look forward to the deliberations that will occur once again within these council walls," Speaker Morgan said. "Within these past few months, it has been immensely active for the Council's standing committees and the entire Legislative Branch."

"I welcome the council delegates who have arrived on horseback and in wagon from our four sacred directions across the Navajo Nation to the Council Chamber," Speaker Morgan said. "This horse ride that began 11 years ago was founded by Council Delegate Leslie Dele to commemorate the strong leadership demonstrated by our past leaders. Acknowledgement is given to their strong conviction to always, 'believe in our Navajo Nation.' It is our past leaders who have taught us to always have 'hope for our future.'"

"Within these past few months, Council Delegates and I honored Navajo Nation and American fallen warriors and heroes by participating in the Navajo/Hopi Honor Run and the Navajo Nation Honor Run to Washington, D.C. during May," Speaker Morgan said.

He said, "A bright spot for the office of the speaker includes joint efforts between my office and Arizona State Senator Albert Hale for the introduction of a new Dilkon courthouse legislation."

"Sen. Hale moved forward with it before the Arizona Senate," Speaker Morgan said. "During the process, we worked with Navajo Lobbyist Katosha Nakai of Lewis and Roca, L.L.P. in lobbying the Arizona Senate and House Legislators."

Through the budget negotiations the $2.2 million requested for the new Dilkon courthouse was reduced to $2 million, Speaker Morgan said.

The Navajo Nation Council Chamber Renovation Project included "major work that has been completed is the demolition and replacement of the upper and middle roofs as well as the roofs of the north and east conference rooms."

"The heating, ventilation and air conditioning unit was also replaced and a stone screen wall was built to shield the HVAC unit and to help reduce the noise associated with the unit," Speaker Morgan said. "The only segments that need to be completed are the replacement of the windows on the upper roof area and the repair or replacement of the vigas. I commend my staff, especially the Council Chamber Project Manager Emerson Notah for their persistence and patience."

"A few days before the deadline day for the GADA Grant submission, the Steamboat, Shonto, Lupton, Houck and Teesto Chapter Houses each submitted proposals with chapter resolutions for GADA funding," Speaker Morgan said, adding that there was a problem that the grant notice was not available before or during the spring session and the state wouldn't accept a chapter resolution to authorize the project proposals. "With my Office working in a join effort to remedy this situation, my Office was informed that the Arizona Governor's Office has considered the five chapters' applications for GADA grants complete with their Chapter Resolutions. Also this is a one-time waiver that does not mean the grants will be awarded; it only means that the projects will be considered."

Speaker Morgan concluded his quarterly report message by saying, "During this council session, we be asked to make decisions on issues of great significance for our people. The issues that have been brought before us this session, as in all our sessions, require careful deliberations, but than that that, they require action that will bring about the greater good for the Navajo Nation."