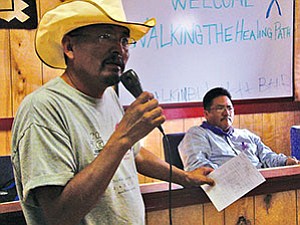 LEUPP-In the early afternoon of July 18, a Leupp resident allegedly shot his wife, then barricaded himself in his house for hours. As the scenario unfolded, John Tsosie, his father, Ernie Tsosie Jr. and their companions Gerald Milford and Leanne Guy were walking into the community. The four have been walking across the Navajo Nation with a message against domestic violence in a walk they call "Walking the Healing Path."

Despite the calamity, Leupp Chapter officials busied themselves by hosting the planned domestic violence rally and dinner while lending assistance to a growing number of state, county and Navajo Nation law enforcement personnel and fielding calls from concerned individuals.

The irony that less than a mile away, an extremely dangerous domestic violence situation was playing itself out.

"This really brings the [message] home," John Tsosie said. "I hope after this is over, this community can come together, realizing that domestic violence can happen any time, any place and to anybody."

Tsosie, a victim of domestic abuse, painted a frightening picture of his father (Ernest) as an abuser-an abuser of alcohol, of his wife, and sadly, of his own children. Luckily, the elder Tsosie turned his life around.

"I wasn't always a drinker or an abuser," Tsosie continue. "I had to find myself again."

Tsosie's memories of childhood included his father yelling, arguing and drinking. He grew up with the fear of what was going to happen next, and where he and the family would be sleeping that night.

Ernest confirmed the frightening image his youngest son remembered of him-so different than the image he presents today. Sadly, he too had been the victim of domestic violence; his actions as he grew older ensured that his own wife and children would be drawn into the cycle.

"When my son tells the stories of what I used to be like, it hurts me," he said. "I should never have put my family through those things."

Tsosie found release through prayer. He remembers this day being a Sunday, as he'd just come off a Saturday night binge.

"I got down on my knees and prayed hard. He heard me."

Tsosie said that everyone must find their own way to support their effort to break the cycle of abuse.

"I remember when my son Ernie (Ernest Tsosie III of the comedy duo James and Ernie) was a little boy, I was yelling at my wife. She went to the side of the house and got a big rock and threw it at me. I started towards her, but Ernie stood in front of her with his little fist up like this, with tears running down his face. He was just a little boy, but he wanted to protect his mom. I hurt him in his heart and soul," Tsosie said. "He's the one I almost lost. He began drinking and doing drugs."

Tsosie said that his son often came home drunk, looking for a fight. After one such confrontation, his grandson demonstrated a chilling fact.

"I felt a little arm go around my shoulder. It was my grandson, Ernie's son. 'I'm sorry for what my dad did,' he told me, and I realized that he too was caught in the vicious cycle."

As Ernie talks about after every performance, he too found release in prayer.

"Just by looking at him, hearing what he says and does [as a comedian], you wouldn't know he had a problem," Tsosie said. "I am proud of all my kids-they are all working against domestic violence in their own way. My daughter, Leanne Guy, runs a shelter for victims of domestic violence.

"Women are the most sacred thing," Tsosie said. "I always apologize to women as a man. I want to say I'm sorry that you were hurt by a man."

Council Delegate Thomas Walker Jr. outlined the statistics of violence, including the fact that every 20 seconds, someone dies from domestic violence. He lost a sister to domestic violence in 1989. Though there were no witnesses, forensic evidence showed that she had been run over by a truck after an argument with her boyfriend.

"The person responsible for her death is free today, out living his life. My sister paid the ultimate price of violence."

"In some cases, it is the woman in the relationship that could be the abuser, the one who instigates verbal abuse or even becoming violent. I've seen it. We need to look at both sides and look for solutions. But the real victims in this whole situation are the children, as we have heard from John."

Studies at Navajo show that children are not learning effectively, Chee said, citing home environment as a real problem.

"Children are not focusing; they are not concentrating," Chee said. "We have parents not listening to their children. Many or so overwhelmed and depressed about what happened at home the night before. There is drinking and a fight, maybe they had to leave the home, yet they are expected to be in class on time and ready to learn, but it isn't happening.

Chee, who has been married close to 25 years, offered insight into his own approach to a working relationship.

"If you always want to have the last say or upper hand in every discussion, it's never going to work," Chee said. "There is a time when you have to say, 'all right, let's get over it and go on to other things. I've learned that sometimes you just have to shut up."

Isabelle Walker, an assistant chief of staff to Navajo Nation President Joe Shirley, illustrated the frequency of domestic violence by counting her steps, realizing that every three seconds someone in this country is victimized.

Former Miss Navajo Nation Radmilla Cody said that her participation in the walk was "a beautiful thing."

Cody, a survivor of domestic violence, joined the walk the morning of July 18.

"This is a family [coming] together from their experiences as former perpetrators and victims of domestic violence," Cody said of the Tsosies. "They are sharing their stories to bring to light an awareness of this societal ill that is plaguing the Navajo Nation and our country as a whole.

"It takes a lot of courage for someone who was once an abuser to confront his unhealthy behavior-to say, 'what can I do to make my life and the lives of my family better, so that they are no longer mistreated or living in fear," Cody continued. "I commend them for using their personal experiences to make a difference-in ending the cycle of abuse and violence."

As a woman who has suffered abuse, walking with men who have been both abused and abusers was a very powerful experience.

"For me, this is a sign of hope and it makes me feel even stronger about people realizing that they can bring about change through recognizing the mistakes from their lives and learning from them," Cody said. "When you can give back in this way, you instill the message of hope to the man who is abusing his family, or to the victim of domestic violence, that they deserve love and respect without pain in a physical, mental or spiritual manner."

Cody said that she was really excited to participate in the walk and to be there with the walkers.

"Even as survivors, we are still healing, and what better way to do that than in walking, sharing our stories, and connecting with the earth," Cody said. "We are all sharing the same dream to end the endemic cycle of abuse. It takes a team effort to heal society."

John Tsosie thanked the many people who have come out to show support, and offered special thanks to the First Lady and her staff, the Office of the President and Vice President, the Division of Social Services and Behavioral Health, Shi Heart Home Health, Amnesty International and Jerry's Café.

Walking the Healing Path will continue across the Navajo Nation through August 15. Information on how to join the walk can be found at www.walkingthehealingpath.com. Victims or perpetrators of domestic violence can find links to help at www.radmillacody.net.