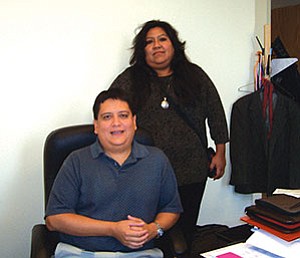 Lucinda Hughes-Juan (standing) and Kenneth Poocha pose for a photo. Hughes-Juan, a member of the Tohono O’odham Tribe, was recently selected to chair the Arizona Commission of Indian Affairs (AICA). Poocha, from the Hopi Tribe, is executive director of the AICA (Courtesy photo).

PHOENIX-Lucinda Hughes-Juan was recently elected the chairwoman of the Arizona Commission of Indian Affairs (AICA).

Hughes-Juan, a member of the Tohono O'Odham Tribe, hopes that ACIA will improve and strengthen the relationships between Arizona's tribes as well as between the tribes and the state.

Hughes-Juan emphasizes the need for collaboration.

"We need to have respect within boundaries of individual nations," she said.

Hughes-Juan said the tribes' need to make the ACIA aware of their concerns.

"We want to identify the tribes' needs and help them," she said.

Hughes-Juan, a business instructor, said the ACIA needs to get out into the tribal communities and help in whatever way they can.

"We need to be more proactive," she said.

Hughes-Juan said the ACIA can't lobby because it's a state agency, but the agency can advocate for tribal interests.

Kenneth Poocha, executive director of the ACIA, said the agency is waiting for direction from Arizona's tribes.

Poocha, who is Hopi, said the ACIA is already ahead of other states on advocating for Native Americans.

"Most other states are miles behind us. There are a few that are comparable: New Mexico, Nebraska and Hawaii," he said.

Poocha said the ACIA will continue to work with rural and urban tribes. He said the tribes have contracts with the state on health care and other issues so what the state does impacts them too.

"We want the tribes to have a seat at the table, and we're starting to do that," he said

Hughes-Juan graduated from Phoenix Indian High School, where she won journalism awards, before going into social work. She earned an MBA from the University of Phoenix and a doctorate in business from Walden University with an emphasis in leadership and organizational change.