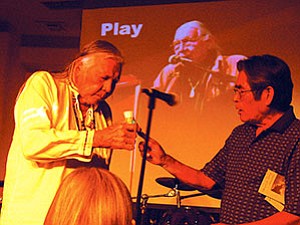 SEDONA-Noted activists, actors and performers Floyd Red Crow Westerman, Dennis Banks, Keith Secola, Pete Sears, Joseph Langham and Wild Billy Knee Bone were among a group who participated in a benefit concert supporting next year's planned re-enactment of the American Indian Movement's 1978 Longest Walk-an event that successfully defeated 11 bills designed to undermine the rights of Native Americans. One of these bills, HR 9054, the "Native American Opportunity Act" would have abolished all treaties made between the U.S. and Indian tribes-denying them all the rights guaranteed by those treaties.

The planned "re-walk" will be to bring attention to the need for a healthy environment and healthy people-highlighting problems with alcohol and substance abuse, diabetes, and environmental destruction.

The event was held at the Sedona Creative Life Center on July 12.

"It is our history to walk," Banks said, remembering the Long Walk of the Cherokee people as well as the Navajo and other tribes. He described the 1978 event, which protested bills that would have stripped tribes of treaty, fishing, hunting and water rights to name a few.

Masaou Yamamoto, founder of the Yamamoto Cup and a strong supporter of the work of Banks and Westerman, was on hand to explain his involvement in the event, a planned five and a half month walk from Alcatraz, San Francisco to Washington D.C.

Yamamoto said that he had established the Yamamoto Cup, a traditional canoe race of the Ojibwe people, to bring cheer to the youth he first observed at the Leech Lake reservation that Banks calls home.

"I hope one day this canoe race will be in the Olympics," Yamamoto said through a translator. "I want to see the youth see the rest of the world. They will see how rich they are with their culture, that it is in their blood."

Yamamoto was instrumental in defining the scope of the upcoming walk. He described a stop at a field of sage where he and his colleagues planned to collect some of the sacred herb.

"I realized the field was filled with garbage, and I grew angry and upset," Yamamoto said. "I asked, 'Why don't you get upset to see the sacred sage insulted by the throwing of garbage on the street?"

This led to an additional challenge to Banks and other walk organizers.

"Why just walk? Why not collect garbage along the way to make a statement," Yamamoto said.

This is a challenge that Banks acknowledged.

"I talked to the national coordinators of the event about the "Clean Up America" campaign, and Yamamoto stopped me, and we changed it to the "Clean Up Mother Earth" campaign.

Westerman spoke strongly about the state of the world today.

"The earth is collapsing, but there are circles that are getting stronger. These circles not only include Indian people, but all people. It's a matter of connecting people. We're really going to need each other," Westerman said.

"The Bible said very little about protecting the earth," Westerman continued. "That's what has gotten people in the mess they are in today. The missionaries came to us too, and some of our people became just as lost as the ones with the Bible."

Westerman expressed his belief that a return to Native tradition and respect for the earth is the only way to go at this time in history.

"It's all about the environment," Westerman said. "If you wake up in the morning and see an injustice, you've gotta do something about it. That's what I've been doing my whole life."

Former Hopi Chairman and director of the Black Mesa Trust Vernon Masayesva presented Westerman, Sears, Yamamoto and other performers with small gourds of water designed to represent the need to protect the drinking water of the world.

The American Indian Movement (AIM) is a Native American activist organization that got America's attention in the early 1970s with the takeover of the Bureau of Indian Affairs headquarters in Washington D.C. as well as the standoff at Wounded Knee, S.D. that resulted in several deaths including that of two FBI agents.

Westerman has appeared in movies including Dances with Wolves, The Doors, Buffalo Girls, Lakota Woman and Grey Owl. His television appearances include parts in Walker Texas Ranger, Northern Exposure, L.A. Law and X-Files. Westerman is also an accomplished musician-who recently released a cover album of the music of Johnny Cash.

Banks is one of the co-founders of the AIMß, and has appeared in War Party, The Last of the Mohicans and Thunderheart. Banks released a recording of traditional Native American songs in 2001, and has performed with other bands. He is co-author of Ojibwa Warrior and Sacred Sole, and is an inspirational speaker against drug and alcohol abuse.

Pete Sears performed with the Jefferson Starship from 1974 to 1987, and has played keyboards, bass guitar and accordion with numerous artists, including Flagstaff's Joseph Langham and Wild Billy Kneebone (Each Others' Legend). Sears also plays with the "Jorma Kaukonen Trio" and in the band "Hot Tuna."