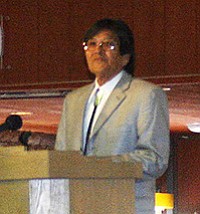 KYKOTSMOVI-Ferrell Secakuku, former Chairman of the Hopi Tribe, announced that he has been diagnosed with terminal cancer. Secakuku, 69, is alert and not suffering. He has decided not to undergo chemotherapy, preferring to leave the world, as he said, "by letting nature take its course."

Chairman Secakuku led the Hopi Tribe from 1994 to 1997. During his term he helped negotiate a settlement to end a longstanding land dispute with the Navajo Nation. He also helped secure funding for a new Hopi Health Care Center. While serving as Chairman he also was elected president of the Intertribal Council of Arizona, and helped secure federal funding to fight the diabetes epidemic in Indian Country.

Prior to his election as Chairman, Secakuku served on the Hopi Tribal Council as a representative from Sipaulovi village. He was also a successful businessman and farmer.

In 2006, he completed a master's degree in anthropology from Northern Arizona University in Flagstaff. He focused his studies on connections between early migrations of Hopi people and the Indigenous people of Mexico. Secakuku was inspired to return to school by his desire to help preserve the Hopi way of life and the importance of Hopi culture and teachings. He also sought to teach and expand the use of the Hopi language by recording and performing childrens' songs in Hopi.

Chairman Secakuku is a member of the Snake Clan in his Hopi Village of Sipaulovi. He remained faithful to his religious ceremonial responsibilities before, during and after his term as Chairman. He respectfully requests that Hopi traditional ways be followed during this time. Therefore, there will be no public memorial after his passing.

In recognition of Ferrell Secakuku's service to the Hopi people and his many accomplishments, his family will host a public reception in his honor at the Hopi Tribe's Veterans Memorial Center on July 16, at 10 a.m.