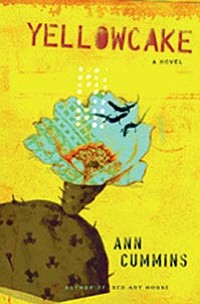 Ann Cummins, author of a collection of stories entitled "Red Ant House," takes on the uranium mining industry and its devastating effects on the land and its people in "Yellowcake."

The story opens with 65-year-old retired mill foreman Ryland Mahoney receiving a visit from Becky, the daughter of Woodrow Atcitty, a Navajo mill worker stricken with lung cancer. Becky is accompanied by two Anglos. They are seeking records that will help in the legal battle to provide uranium mill workers compensation under the Radiation Exposure Compensation Act (RECA). At this point in the story, RECA covers only uranium miners.

What becomes clear to the reader is that no one culture or socioeconomic group is immune to the effects of uranium mining, and that pretending a problem does not exist is not going to save anyone. Two men are sick-one is Anglo, the other Navajo. Unlike Ryland, "Woody" faces his illness with a resignation fueled by the closing moments of a long battle.

Ryland denies that he is sick-he even tries to reassure Becky that her father will survive his illness. Nonetheless he still dreams of being in the crusher room at the mill, where golden dust gilded the oven-hot air filled with the noise from the violent grinding of rock. This is the world where his best friend, Sam Behan, worked every day, yet he showed no sign of sickness. Ryland, who avoided the room like the plague, has not been so lucky. These days, his most intimate relationship is with his oxygen tank that accompanies him everywhere he goes.

Becky has come to Ryland hoping to find records that would prove her father's employment history at the uranium mill. She is sent away by Ryland, but his wife, Rosy, is definitely not a woman with her head buried in the sand. She becomes involved with the issue even though her hands are full with a sick husband and a soon-to-be married daughter.

The families in this story are tightly knit together, even though years pass before some characters meet again. Sam was once married to Rosy's sister, Lily-Sam and Ryland married the sisters in a joint ceremony. Lily divorced Sam when she learned that he was having an affair with a woman named Alice Atcitty-Becky's aunt-and the mother of Becky's cousin, Delmar. The affair is ending as Sam's relationship with his half-Navajo son, Delmar, who is trying to re-enter society after a stint in prison, is only beginning.

The characters in this book become real to the reader. Not one is perfect, some far from it. And even the worst of them are capable of moments of true compassion and beauty-moments of human kindness that somehow overshadow acts of pure cruelty. This is a good thing. There are people in this story that one absolutely has to care about, and seeing them hurt hurts.

Like real life, this is a story of life and death, and of crazy, almost unbelievable events. People pay dearly for their actions, or non-actions, and not always with money.

Becky is pulled this way and that, her heart set against a very lucrative job offer but knowing that her family will need the money it might bring. Her value as a Navajo woman hangs in the balance.

Lily has a secret she is willing to pay to keep-and her struggle to be finally free of years of pain and a life led far too safely leaves the reader rooting for her.

At the end Sam-the blackest sheep in a herd seemingly devoid of a single white-makes a desperate bid to repay his many debts. Whether he is successful in this effort is never neatly established.

The dark undertow of this engaging story is a fictionalized history of the battle of uranium miners and mill workers who gave their lives as they worked-unprotected and uneducated about the dangers of their jobs-to fuel the energy and national security industries. This part of the story does not end as the reader closes the book. Navajo families presently struggle to receive compensation. Many cancer victims do not live to see compensation. Their families may collect later, if they can walk the long trail of seemingly endless red tape that makes compensation next to impossible for some.

The fact that Ryland's mill records are located in a personal storage unit highlights part of the struggle that Navajo victims face in trying to prove their history of employment-a history absolutely necessary to receive compensation.

Cummins leads us through this roller coaster ride of a story with a finely-tuned pen. And she is very clever. Just when you think you know where the road will end, she kicks the legs out from under you and runs in a new direction. And you follow eagerly, gasping from the chase, but no way are you going to let this one get away from you.

Ann Cummins teaches creative writing at Northern Arizona University. When she is not teaching, she lives with her husband in Oakland, Calif.