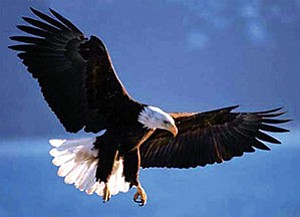 KYKOTSMOVI-The federal government removed the bald eagle from the endangered and threatened list June 28 leaving Arizona tribes and environmentalists feeling that they were left out of the decision making process.

U.S. Secretary of Interior Dirk Kempthorne removed the bald eagles from the threatened list, but made no provisions for the Arizona bald eagle as the tribes, environmentalists and Arizona Gov. Janet Napolitano had asked.

The previous day Gov. Napolitano sent a letter to Kempthorne asking that an exception be made so that the Arizona bald eagle would continue to get the protections granted from the 1973 Endangered Species Act.

Gov. Napolitano stated in her letter that Arizona's tribal governments had not been adequately consulted during the process.

Lee Kuwanwisiwma, director of the Hopi Cultural Preservation Office, said the numbers show Arizona's bald eagles should get special protection because there are 7,000 breeding pairs throughout America, but only 43 breeding pairs in Arizona.

The day before the decision was made Hopi Chairman Ben Nuvamsa filed a letter with the federal government stating that the statistics were glaring with so many eagles throughout the states, but only 43 breeding pairs in Arizona.

Chairman Nuvamsa further noted that 20 of the breeding pairs were on tribal land and three or four are on ranchlands in the Springerville area that the Hopi Tribe has purchased. He argues that these numbers show that the Hopi Tribe deserves to be involved in the management of the bald eagles.

Nuvamsa also questions why no number has been set for the recovery goal for the Arizona bald eagle. He added that the process has been going on since 1999 but that the Arizona tribes were not informed until this past February.

Kuwanwisiwma said he was not surprised by the decision because the attitude of the U.S. Fish and Wildlife has been "just to give lip service." He added that the federal government is acting like one size fits all rather than paying attention to the needs of the various states, particularly Arizona.

Kuwanwisiwma said the governor's request came a bit too late. He said the tribes had been soliciting her support since February.

"But until two weeks ago the governor's office said it was staying out of the issue because it was a federal issue," he said. "I'm happy that she joined us, but she should have done this two to three months ago instead of waiting until the 11th hour. It was good, but too late."

While the state news mentioned the unhappiness that the tribes and environmentalists had with the way the delisting was handled, the national network news portrayed the delisting as a rosy picture of the bald eagles comeback.

Kuwanwiswma said the U.S. Fish and Wildlife Service gave a view of the total picture without noting the differences between the states. He noted that Wisconsin has about 5,000 of the bald eagles while Arizona has 43 breeding pairs and New Mexico has only three or four bald eagles.

Kuwanwiswma said Arizona's tribes now need to talk about the bald eagles and come up with a strategy about how to protect the bald eagle and how to work with the other tribes as well as the state and federal governments.

The Center for Biological Diversity and the Maricopa Audubon Society have filed a lawsuit contending the federal government ignored scientific data when they made the decision to deny protection to the Arizona bald eagles.

The Arizona Commission on Indian Affairs passed a resolution June 20 opposing the delisting of the bald eagle from the threatened species list.

The resolution stated that ACIA opposes the delisting because "the bald eagle is a significant cultural and religious resource including the utilization of the feathers which are used in various religious ceremonies."

The resolution stated that many tribes have expressed their concerns, voiced their opposition to the delisting and urged USFWS to continue maintaining the threatened status of the bald eagle.

The resolution stated that the concern is that there are only 43 breeding pairs in the state and their habitat is fragile, there are jurisdictional concerns and there has been a lack of government to government consultation as required by law.

The document stated that the ACAI declares its support for all Arizona Tribes in their mission opposing the proposed delisting of the eagle.

Lucinda Hughes-Juan, chairwoman of the ACIA, said the tribes now have the responsibility of taking additional action in their quest to fight the delisting of the eagle as threatened.

Hughes-Juan, a member of the Tohono O'Odham Tribe, said many tribes are taking the proposed delisting seriously because the bald eagle has cultural significance to them.

"A lot of tribes are tied directly to the eagle," she said.

Hughes-Juan said the eagles are recognized as spiritual by many tribes and added that they are part of the legends of the Tohono O'Odham Tribe.

Ken Poocha, executive director of ACIA, said he thinks the ACIA resolution will have an impact.

Poocha, who is Hopi, said the eagle is a culturally sensitive animal.

Poocha said there is room for protecting the eagle and development.

The Hopi Tribe has been among the leaders in the state and the nation in proposing the delisting of the bald eagle from the endangered and threatened species list.

Since many of the bald eagles are found on reservations, the tribes are also upset that they have not been consulted during the process and remain out of the loop on how bald eagles should be managed.

The bald eagle was listed as endangered in 1978, but downlisted to threatened in 1995, meaning that it started to recover. The proposal to delist it as threatened began in 1999.

The National Congress of American Indians has also expressed its opposition to the delisting.

Kuwanwisima said there are only three habitats for bald eagles in Arizona: Verde River, Salt River Canyon and Mormon Lake.

"The tribes have not been included in the consultation or management that has already been agreed to by the federal and state government," he said.

Kuwanwisiwma said if the state takes over management, he does not know if they will include the tribes in the management of the bald eagle.

Kuwanwisiwma said the USFWS has a "terrible record of government to government relationships."

The San Carlos Apache Tribe has been among the leaders in opposing the delisting in Arizona because their reservation abuts the Salt River where many bald eagles are nesting.

Kuwanwisiwma recalled that bald eagles used to nest as close as Leupp along the Colorado River until the 1940s. After the damning of the Little Colorado River, he said the habitat for the bald eagle was lost.

Kuwanwisiwma said the bald eagle has significance in the Hopi religion. The Hopi are allowed by the courts to use eagle feathers in their ceremonies. He said Hopis have social dances about bald eagles and many Hopi artists depict bald eagles.