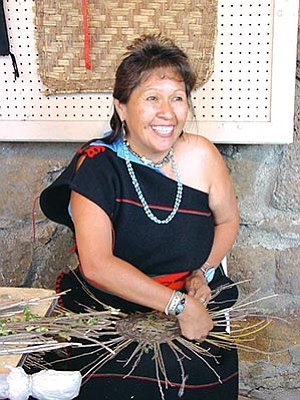 Ruby Chimerica, a traditional basket maker from Bacavi Village, was one of the weekend Hopi Show demonstrators (Photo by Rosanda Suetopka Thayer).

FLAGSTAFF-Exploring and experiencing Hopi art and culture directly from the source is exactly what the Museum of Northern Arizona (MNA) accomplishes each and every year by presenting their annual Hopi Festival of Arts and Culture.

It's been "right on the mark" for the past 74 years according to both tribal participants and the visiting audience that attended the festival during the weekend of June 30 and July 1.

There was much to enjoy, appreciate and savor in both the indoor and outdoor gallery spaces at the MNA with 43 Hopi artists specializing in both two- and three-dimensional design work, four separate musical artists and dance groups who performed, along with traditional Hopi games and basketry demonstrations.

The MNA Spirit Award went to Dorleen Gashweseoma of Hotevilla, Third Mesa for her traditional Piki basket platter. Gashweseoma took Best of Show two years ago and is extremely sought after for her meticulous basket work.

The MNA Memorial Award went to Bertha Wadsworth for her Katsina Girl Coil basket. This special memorial award celebrates the life, legacy and basketwork of the late Hazel Dukepoo.

This year, the coveted Charles Loloma Award went to Raymond Kyasyousie of Hotevilla, a contemporary jeweler, for his intricate overlay bracelet that featured both gold and turquoise accents. This award is given to a Hopi artist who creatively utilizes their Hopi heritage as a springboard for new, contemporary and innovative design interpretation in their chosen field of art.

Some of the special Hopi entertainment this year included Casper and his Mighty 602 Band.

Casper Lomayesva is originally from the village of Kykotsmovi. His daily job and family keep him full-time in Phoenix, but he was able to come to Flagstaff for the Hopi festival, reminding his home reservation and local fan base of his talent, off-reservation popularity and outstanding singing and performing skills.

Backed by his 602 Band, Casper entertained in three separate sets over the weekend, sold his CDs to the crowd and stayed to allow for photos and autographs after his performances.

Robert Breunig, Director of the MNA and producer of the Hopi show was thrilled with the standing room only crowd on opening night as well as the heavy crowd on Saturday.

Breunig stated, "It's really important to me that Hopis feel comfortable here at our museum. What I want is to provide a place where meaningful cross-cultural communication can take place in an appropriate way without crossing or disturbing any cultural boundaries. I hope that the MNA can provide that beacon of tolerance and sincere communication for the Hopis that come to share their art, their culture, their language and their lives."

Other winners in the fine arts category at the Hopi festival included:

Best Youth Awards (18 years and under):