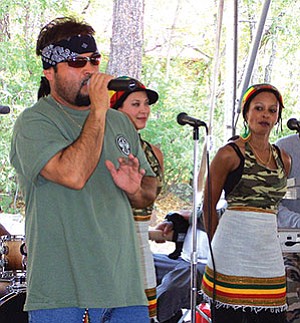 Casper Lomayesva performs with members of the Mighty 602 band at the 74th Hopi Festival held during the weekend of June 30 and July 1 (Photo by Somana Yaiva).

Casper "Lomadawa" ("Beautiful Sun" in Hopi) Lomayesva, is a creative pioneer in the blending of traditional Hopi philosophies and traditions with contemporary reggae vibes into a whole new sound that is uniquely and appropriately called Hopi reggae.

With three full length albums under his belt and countless hours on tour, Casper has felt that it is time for his music to take a new direction, one that strikes at the very lives of people regardless of their ethnic backgrounds, a battle against a foe who is literally taking lives by the minute and damaging the very core of every family that it touches. The foe is methamphetamine, or "meth."

Inspired by a family tragedy, Casper is now using his musical talents to bring attention to Native communities by passing along the message about meth use and abuse and how it is causing rampant devastation in Hopi, Navajo, and other Native communities.

Methamphetimine use has skyrocketed in Native communities within the past decade. The most recent survey done in 2006 by the National Congress of American Indians (NCAI) estimated the number to be around 1.7 percent (for Native Americans and Alaskan Natives, and 2.2 percent for Native Hawaiians). That is more than double the use of any other ethnic group in Arizona-0.7 percent for Whites, 0.5 percent for Hispanics, 0.2 percent for Asians and 0.1 percent for African Americans for comparison.

With just over 560 federally recognized tribes in the United States and several hundred groups not recognized, all have felt the devastation that comes with increased meth use as well as the other types of social dysfunctions that surround meth use, such as domestic violence, child abuse/neglect and various other crimes. Nearly 45 percent of crimes that have been committed on the reservations involve meth in some way, and close to the same amount of reported child abuse or neglect cases are increasing due to increased meth use in Native communities.

Casper's group, the Mighty 602 Band, is known for their positive and politically conscious lyrics and vibe. They hope that by using their music to bring attention to the meth problems affecting our Native communities that there will be increased awareness and consciousness of the issue.

"We want to get the word out that this meth use has got to stop. It is killing our people, our culture and our very future. Every person that I have talked to about [the] new direction with our music has had some sort of direct or indirect contact with meth use," Casper stated.

Casper and The Mighty 602 Band, who most recently performed at the 2007 Museum of Northern Arizona's Annual Hopi Festival, have also performed at the Quechan Paradise Casino on July 2 and 4. They will then travel to Colorado for a series of tour stops including a stop at the Mishawka Amphitheater on July 15 and then on to Vermont for the Vermont International Reggae Music Festival on August 11.

In Vermont, the group will be performing with Lamb's Bread, One Band, Adowa, Batch and Attitude with the Zioneers, Taj Weekes and several other reggae groups from around the world.

Casper and the Mighty 602 Band are currently touring and are also working on their fourth album, currently untitled, which will be released soon.

The three previoußs albums, "Original Landlord," "The Sounds of Reality," and "Honor The People" are available for purchase. Their albums, booking information, pictures, and more about Casper and the Mighty 602 Band is available on their Web site at www.3rdmesa.com.