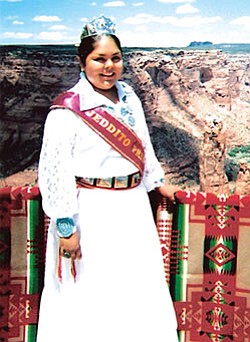 JEDDITO-Brittney D. Etsitty, a student in Jeddito, has been accepted into the People to People World Leadership Forum. Etsitty will join a select group of students in Washington, D.C., in March 2008 to study leadership and explore some of the United States' most prominent monuments and institutions. Etsitty will earn high school credits while attending the forum.

Etsitty was nominated and accepted for the honor based on outstanding scholastic merit, civic involvement and leadership potential.

The program is coordinated by People to People Student Leader Programs to fulfill the vision President Dwight D. Eisenhower had for fostering world citizenship when he founded People to People during his presidency in 1956.

Along with that honor, Miss Etsitty was also recognized as an honor student in the 2006-2007 National Edition of Who's Who Among Outstanding Students in America. She was also chosen as the new Miss Jeddito Princess 2007-2008 for Jeddito Public Schools.