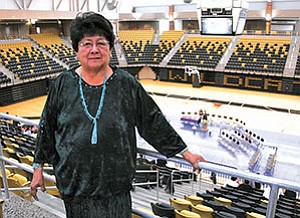 "Today I am standing before you to tell you I am also a product of the GED program. It's the door to open, to be whatever you want to be," said Jackson.

Jackson told the graduates that as a Navajo, she herded sheep and that up until the age of 13, had never spoken a word of English. At that time, she was sent to Sherman Institute in Riverside, Calif. where she earned a certificate that said she could clean a home, which qualified her to become a maid.

"The first thing I learned was how to answer a telephone and say, 'This is so and so's residence and this is the maid speaking.' Before that I spoke [only] Navajo. I carried that certificate with me home on the bus, but I fell asleep and lost it.

Jackson told the graduates she remembered being punished for speaking her Native language in school. "I was forced to stand and face the wall while the students looked at my back," she said.

"I don't ever remember feeling any animosity toward white people and I have no prejudice toward them. I am a person who can jump on a plane and go to New York City and make a friend and talk and be at peace and jump on a plane and come back to the reservation and talk to [my] grandma on a sheepskin. I have two masters-living and learning in two languages," she continued.

Jackson outlined her points for success to the graduates.

"An earned certificate opens the door to knowledge. Knowledge leads to understanding. Understanding leads to wisdom. Wisdom leads to accountability. Accountability leads to commitment. Commitment leads to being responsible," she told them.

"When I was a child, I understood as a child. My father gave me a lamb when I was a little girl. The lamb was earmarked. That earmarked lamb was like the certificate you are receiving today. I was told to herd that lamb into the valley where it could eat the most tender and best grass and get fat for the sale. It meant more money for me when the lamb was sold. The certificate you have received today will open the door to success. You have the potential to go any place and be anything that you would like to be," she concluded.

In addition to her GED, Jackson earned an associates degree and a Language, History and Culture certificate from Navajo Community College (now Diné College), bachelors and masters degrees from the University of Arizona , an additional masters degree from Goddard College in Vermont, and has completed three years of work toward a Ph.D. in Language, with an emphasis in Native Languages.