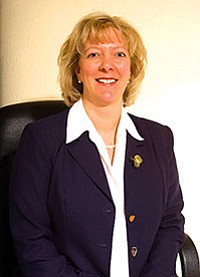 FLAGSTAFF-Leah L. Bornstein is the new Coconino Community College president. That announcement was made June 22 by the CCC District Governing Board. Bornstein is scheduled to begin her new job Sept. 4.

"We are very happy that Leah has accepted our offer," said Board Chair Val Gleave. "We are very impressed by her experience and by the enthusiasm that she has demonstrated prior to coming to CCC. We are confident that she can meet the new challenges that will be facing all community colleges in the years ahead."

The board also took action to rehire current president, Thomas Jordan, for the months of July and August. Jordan's last day had been scheduled for Friday, June 29. He will be retiring after eight years as head of the college.

Bornstein currently is the campus dean and chief executive officer of Colorado Mountain College's campus in Summit County. During her four years in that position the college acquired 20 acres of donated land to develop a new 40,000-square-foot campus as the gateway to Breckenridge. Bornstein is credited with leading the community through the process of designing and developing the new campus and through a successful $4 million capital campaign to build the facility.

In that time, campus enrollment increased by 15 percent, with high school graduate enrollment up 4 percent. Summit Campus, with two learning centers in Breckenridge and Dillon, serves some 3,000 students annually.

Under Bornstein's leadership, the campus also established new programs such as wilderness emergency medical services, nursing and entrepreneurship in response to community needs.