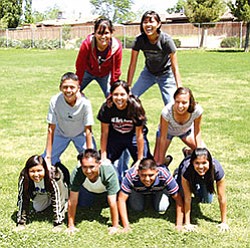 Nine of Tuba City’s top 10 seniors show their playful side during a recent outing. Collectively, these seniors garnered close to $950,000 in scholarship funding, including three $25,000 Gates Millenium scholarships (Photo by Byron Poocha/TCUSD).

TUBA CITY-Taking academic competition and your future college career seriously has been on the minds of 10 Tuba City High School seniors for the past four years. This will now pay off by sweeping major university scholarships and internship opportunities with exotic travel and complex work assignments not far behind.

TC High's head counselor Karen Garcia was thrilled to provide the complete list of seniors who took major university awards and competitive grant opportunities for those students who plan to go onto four-year institutions with their diplomas in hand.

Other awardees are as follows:

• one World Scholar Most Valuable Player award during the Athletic Games in Rhode Island to Lee Ann Dejolie.

An astonishing grand total of $947,000 was won by Tuba City High 2007 Seniors for academic excellence and performance.

For information about TC High School and its award winning programs, call the TC District Office of Public Relations at (928) 293-1185.