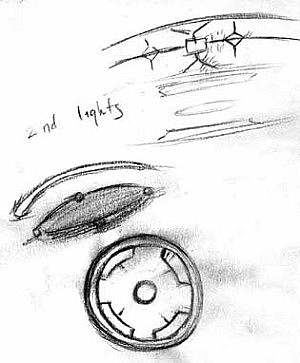 Artistic rendering by Sean Dover of what he claimed to have saw flying above Leupp, Ariz. on his way back home from school in Flagstaff.

LEUPP. Ariz. ‹ The possibility of life beyond earth is indubitable. So, we all wait on earth until that moment when something will attempt to make contact or visit this planet.

For some residents in Leupp, the wait ended with the most recent incident of a UFO visiting the area. It reportedly took place at approximately 7:40 p.m., Wed., Jan. 24 and was visible until after 9 p.m.

According to Sean and Deanna Dover, they were driving home from Flagstaff toward Leupp when Deanna spotted a curious looking object above their Honda Accord.

"I saw a bright light and told my brother to watch it," Deanna, 20, said. "Then it disappeared, then reappeared. I didn't see it as much as he did, because I had to concentrate on driving."

"We were about 10 miles out of Leupp and my sister said she saw something," said Sean, a senior at Sinagua High School. "It had a circle around it and was about one-and-a-half miles above us. It had three lights and was a triangular shape. We kept on driving and when we reached Leupp we saw it had four lights," Sean said.

The UFO then flew over the Church of the Nazarene and the Leupp Public School, they said.

"When it reached the edge of town it went into stealth mode and had only one dim light," Sean remembered.

The pair drove through Leupp and rushed home to tell their parents what they'd experienced.

"We went inside and got my dad's night vision goggles," Sean said explaining that his father is a Navajo Nation Police Ranger equipped with the special device enabling the user to see clearly in the dark.

Sean, Deanna and their parents then went outside to watch the object.

"Then two jets intercepted it in the air. They came from the southwest," Sean said. "Then it headed east. Eight minutes later it lost them and circled back to Leupp. When it got here it started blinking its lights."

Sean explained his confidence in the identification of the object as a UFO and not any other type of aircraft.

"It was traveling too fast to be an airplane and not emitting any noises that a helicopter or plane would have made flying that high," Sean said.

As the family viewed the events, their mother Daisy's friend and colleague Denise Fredericks, a fifth grade teacher at the Leupp Elementary School was witnessing the same things from her nearby home.

"I was coming home from my son's basketball game in Dilkon. When I came inside the house my husband said, 'Daisy just called and said there was something in the sky,' then I saw a triangular thing go overhead," Fredericks said.

Fredericks and Daisy Scott-Dover then met in the center of Leupp near the gas station and watched the events with approximately 30 other stargazers.

"There were two other planes and another aircraft that it looked like was refueling them," Fredericks said.

"It was flying straight and then it turned. It went toward Bird Springs and then turned toward Tolani Lake and then came back this way," she said.

Each of the witnesses described the object as triangular with three or four tiers. On the underside of the craft was a sphere with a pulsating light.

Fredericks and Scott-Dover said the UFO emitted a "yellowish" light and was approximately twice the size of the Leupp Elementary School gymnasium.

The UFO circled the area 15 times.

On the last turn, the craft lights went dark, then suddenly and rapidly illuminated across in a sequential pattern. Finally, the UFO headed southeast toward Winslow.

According to the viewers, several other witnesses attempted to snap shots of the events. However, due to the darkness and distance from the ground, capturing the aircrafts in a photo was not possible.

Each of those interviewed said the events were unique due to the proximity of UFO to the ground, as well as the fact that it was traveling alone. However, it was not the first time they had experienced the presence of a UFO.

"It was really interesting to watch. I believe that it really was a UFO because of my family's history. I've seen [UFO'S] too many times to remember," Sean said. "Leupp is a hot spot for UFO's."

Sean said that "normally" there are numerous UFO's traveling together in a triangular formation.

"We see them, well, I don't want to say we see them all the time, but it's happened before," Deanna said. "When they had that big sighting in Phoenix back in 1991, we saw the same lights here the night before. I guess it's just that no one ever calls it in or reports it here. This was pretty cool. I've never seen anything that detailed beforeŠbecause it was so close."

Dover-Scott and Fredericks agreed that Leupp residents are no strangers to such events and cited similar experiences 15 and 17 years ago.

"We get so excited about these things," Fredericks said. "It was unbelievable because you hear of sightings, but when it happens to youŠ."

"I guess people don't talk about it because it's kind of a mystery," Deanna offered.