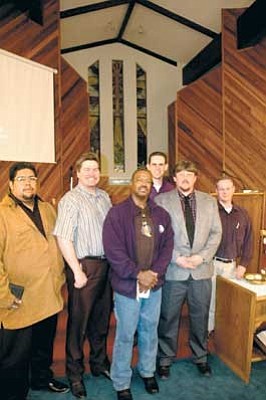 Members of the Winslow Ministerial Association presented Glen Mattox, in the front and middle, with the 2006 Good Samaritan Award for his work feeding those in need.

Leaders of some Winslow churches have been coming together for some time under the Winslow Ministerial Association to form an alliance to enhance Christian power over the perceived forces of darkness. Part of their work, is presenting a community member with the Good Samaritan Award, "in recognition of selfless love and compassionate for the less fortunate."

The 2006 Good Samaritan Award was recently given to Glenn Mattox, president of the Winslow Harvest Men's Fellowship, for his exemplary leadership and dedication towards feeding the hungry for the past four years.

The Harvest Men's Fellowship is an interdenominational non-profit Christian men's organization "committed to doing the Lord's work through service to the community."

He and many volunteers from the Faith Temple Church of God in Christ open their doors and hearts every Monday at 8 a.m. to serve breakfast with side of Holy Spirit.

Hadnot presented Mattox's history, which began on Nov. 23, 1922 in Texas and then migrated to Winslow, where his dad worked for the sawmill and police, and his mother as a cook and housekeeper. Mattox was at one time signed to play for the San Francisco Giants before jumping on the railroad and then for a 25-year career with APS. He has five children and eight grandchildren.

After being presented with the Good Samaritan Award, Mattox thanked God for saving him and providing him with a home to live in.

"This is more than just me," Mattox said. "There are men from other denominations that put time for this and should be honored as well."

He said all people have done something good who are on their way to the destination of heaven, and that together, makes up the body of Christ.

Pastor Fred Harris of the First Baptist Church spoke a bit about the need to form a unified Christian body in Winslow for the benefit of the community as a whole.

"The city of Winslow needs to come together, to push out the darkness that hangs over the town," Harris said "Removal of prayer from school; removal of the commandments ‹ the ACLU has been working to push these things out."

Harris commented about how Winslow residents in Winslow have at times fought the work to create a shelter for those on the streets.

"They say, 'Oh, people have tried that before and nothing ever happened,"' Harris said. "That is the devil trying keep this from happening, but we have new leadership now saying, 'let us just get this done.'"

The Ministerial Association is again up and running and providing emergency shelter services to those on the streets.

"When you pass them in your car and see them on the streets, there is always a comfortable distance from inside your car," said David Mace, pastor of worship ministry and musical maestro at the First Baptist Church.

All of those involved with the Winslow Ministerial Association encourage other Winslow religious leaders or active members to contact them about their cooperative program to provide emergency shelter for those out on the streets.

For more information on the Winslow Ministerial Association contact leaders at the either of the following churches: First Baptist, In Him Community, Baptist Ministries, Faith Temple of God in Christ, Madonna House or Desert View Baptist.